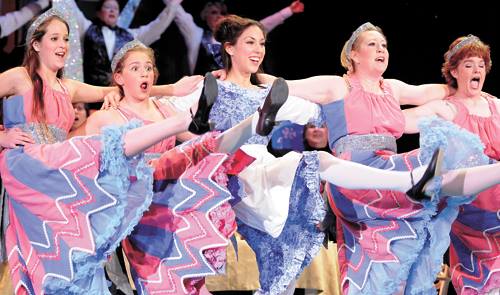 From Anything Goes to South Pacific to Steel Magnolias to Grease, the Bandon Playhouse has been entertaining audiences with a wide variety of dramas, comedies, variety shows and musicals for nearly 40 years.

I recently had the pleasure of talking with Ron and Kathie Lecce. Ron is the president of the Bandon Playhouse board, and his wife Kathie is a board 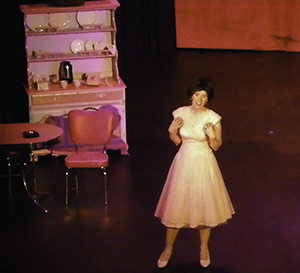 member as well. They made their way from California via the Medford area, and when Kathie, who has a theater degree, was hired as the new postmaster in Coos Bay, they began looking for a small town to finish raising their kids. They decided on Bandon as their home base and feel fortunate to have much of their family still in town and in the area.

On July 26, 1976, some local theater-types, including Sharon Hennick, Tosca Means, and Alice Stadelman got together and decided that Bandon needed a community theater. Their simple goal was to give live entertainment to the people of Bandon, and within just one year, their first production Picnic was on stage in Bandon High Schools cafeteria, regardless of its lacking sound and lighting systems. Working for many years without a facility of its own, the Playhouse used the high school and then Ocean Crest Elementary School for its shows until they began working with the Lions Club on a facility project. They put their creative and motivated heads together, and the idea for the Sprague Theater was born. 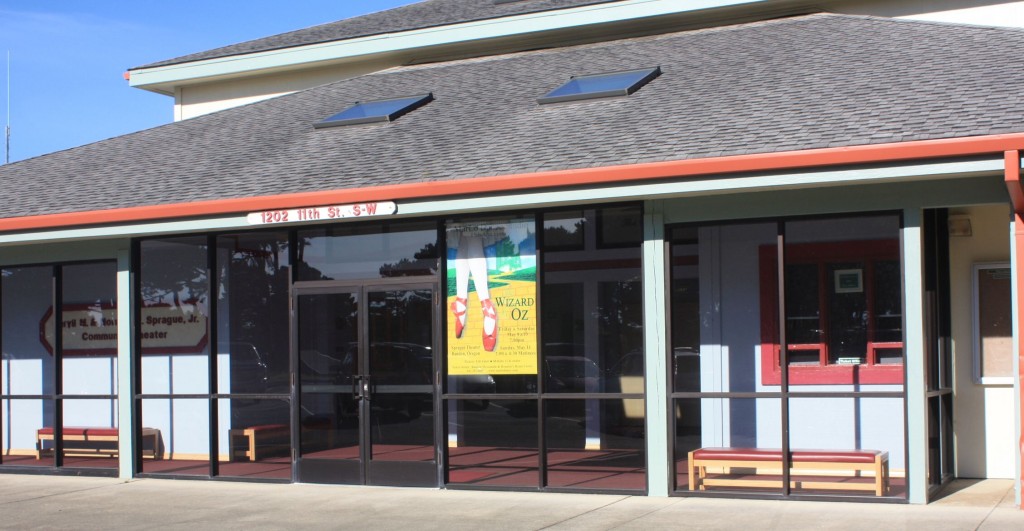 The Lions Club began raising money for a building project, and the design phase began in November, 1996. Many businesses and individuals in thecommunity stepped up and donated funds, materials and skills for a new theater. Cardas Audio was a major contributor, not only donating money, but playing an integral role in the planning phase, making design recommendations for maximum amplification of the sound. The seats were donated by Coquilles Sawdust Theater which was undergoing renovations, and the seats were then sold to donors. Today one can see name plates commemorating those donors on the back of each seat, and inside the lobby is some beautiful wall art in the shape of a tree, each leaf inscribed with the name of an individual or businesses who donated money to the building of the theater. 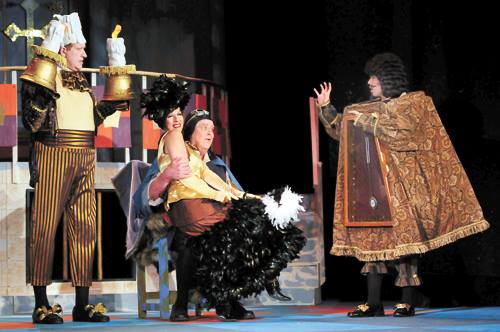 The creation of the Sprague Theater was truly a community effort. Beaming just a bit, Ron said, You could actually call it grass roots theater.

The original plan for the Sprague was for it to be a true community theater, to be used not only for the Bandon Playhouse productions but for other groups aswell. Today, it is also used regularly by the MarLo Dance Studio, New Artists Productions, the Bandon School District, and the Bandon Showcase, and it

is available for groups to rent for large events such as weddings and conventions.

With a building to call home, the Bandon Playhouse continued its goal of providing quality live entertainment to the community. Early on, they realized they needed to appeal to the diverse interests of the towns residents and visitors, so they decided to do a variety of productions each year, typically a comedy or drama in February, a comedy or drama in June, a musical in August, and a Christmas production every other year in December. 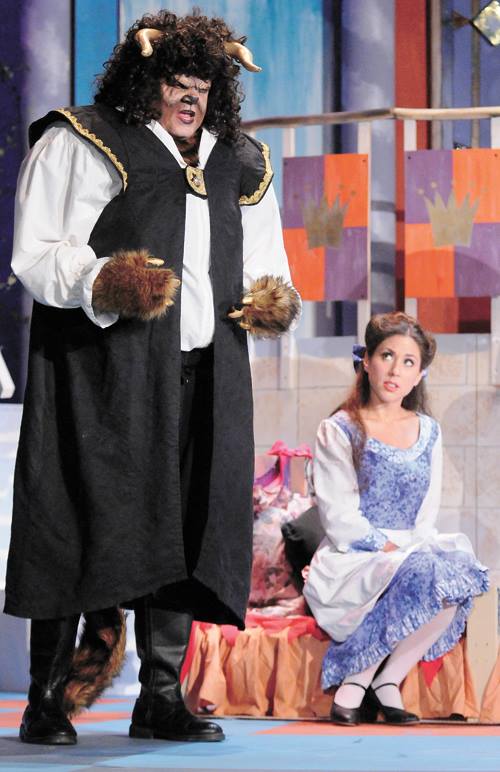 For many years now, the Playhouse has kept a fairly regular performance schedule, putting on 3-4 productions a year, but it has had its share of struggles. For a variety of reasons, they have had to cancel a couple of productions. It hurts, Kathie said, but you have to just try to get on. It is also difficult at times to find directors for the productions theyd like to do, and they have had people come up from Coos Bay and even Portland on a couple of occasions to direct. Although it is very rewarding and well worth it, directing is a big job and is a time commitment.

Putting on a play is a true team effort, and there are many different and very important people involved. An audience is typically focused on the actors, and many are aware of the presence of the directors artistic vision, but few think about the incredible work that goes on behind the scenes. A stage manager alerts waiting actors to the approaching curtain and organizes props, set builders carefully construct scenery, crews tear down the set at the end of each run, and seamstresses carefully alter costumes to fit the actors. People are also needed to serve as ushers, to run the snack bar, and to be front of the house manager of the night and make sure that all goes well in the lobby.

Businesses in the community give a great deal of help to the theater as well. Many buy ad space in a plays program, and others sponsor individual productions. It has been an important way for businesses to be involved in the greater community and for the theater to get critical financial support.

Everyone is encouraged to get involved in the theater in whatever role they feel comfortable. When a director is ready to get a production going, the Playhouse puts notices in The World, the Coffee Break, and the Bandon Western World to call for actors and other volunteers. Ron encourages everyone to consider how they might get involved. The best thing we can tell people is, if you think youd like it, come out and try it! In an effort to bring in directors, the members of the Playhouse community are happy to support anyone who has an interest in directing, even though they may not have experience.

Becoming a general member of the Playhouse for a $5 annual fee is another way for people to get involved. Members can attend the meetings on the first 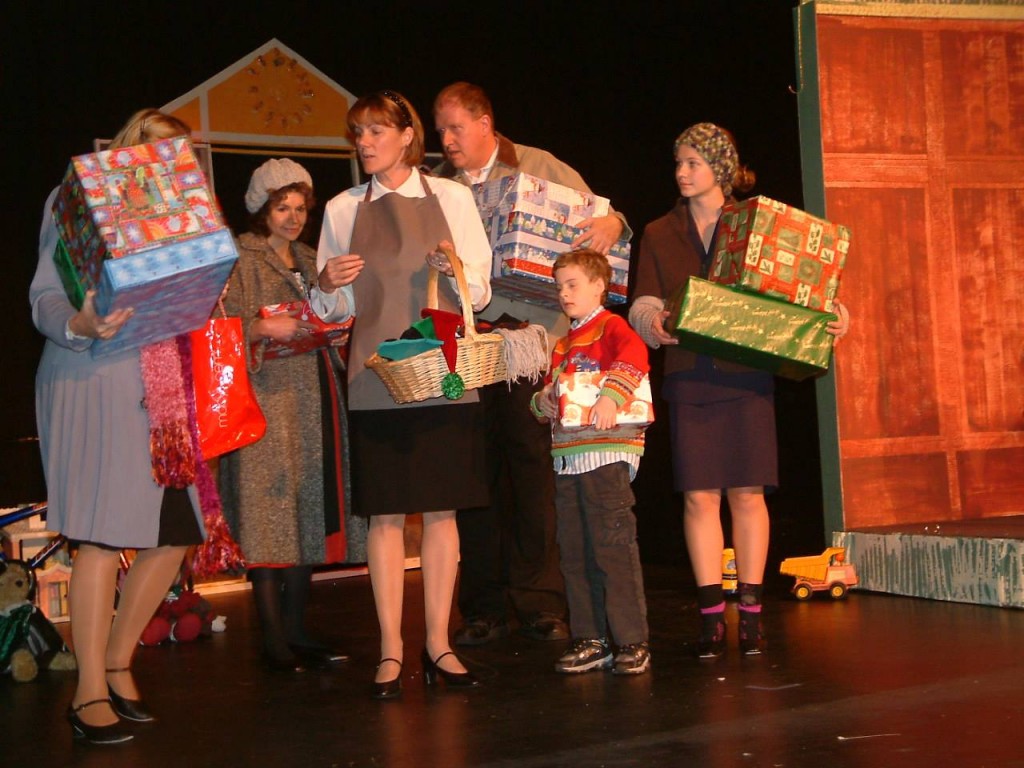 Thursday of each month and give their feedback, suggestions, and input to the board, and membership is a requirement for involvement in a production. Experience in theater is not a requirement for membership, just an interest in the theater an its success, and the board is always happy for new blood to join. Bord members are elected from this group annually.

The Playhouse is looking forward to an exciting future, and they have their 2015 season set and ready to go. Their first production will be a readers theater in June. A readers theater feels somewhat like a radio program where the talented cast, typically small, works without a director and rehearses only a few times before the performance. They sit with the scripts and read their parts, the audiences imagination filling in the scenery and action. In August, the Playhouse is looking forward to putting on the fun musical Spitfire Grill with a cast of 6, and in December, they will bring back Bethlehem Road, written by Bandon resident Neil Davis. Since its first run in 2007, Davis has added to and refined the Christmas-themed musical, and we will see a couple new numbers this year.

The Bandon Playhouse has kept its goal to produce diverse shows, and its productions have always been high quality. Theyre all very proud of the work theyve done, from popular musicals such as Grease to entertaining comedies like Lend Me a Tenor to lesser known yet thought-provoking dramas such as The Trip to Bountiful. As a non-profit organization, all the money made from ticket sales goes back into the theater. Not all productions net the same kind of return, however. The well-attended musicals support the others that dont see the same kind of ticket sales.

Adult ticket prices range from $12-$15 depending on the type of show, a bargain compared to other community theaters. Its definitely not a money-making operation! Ron emphasized.

Making money is not the goal of the Playhouse, however. Their goal is to encourage performing arts and bring live entertainment to the people of and visitors to the Bandon community, and with the hard work of the board; the talent of the directors, actors, and backstage crew; and the support of the community, theyre doing just that.