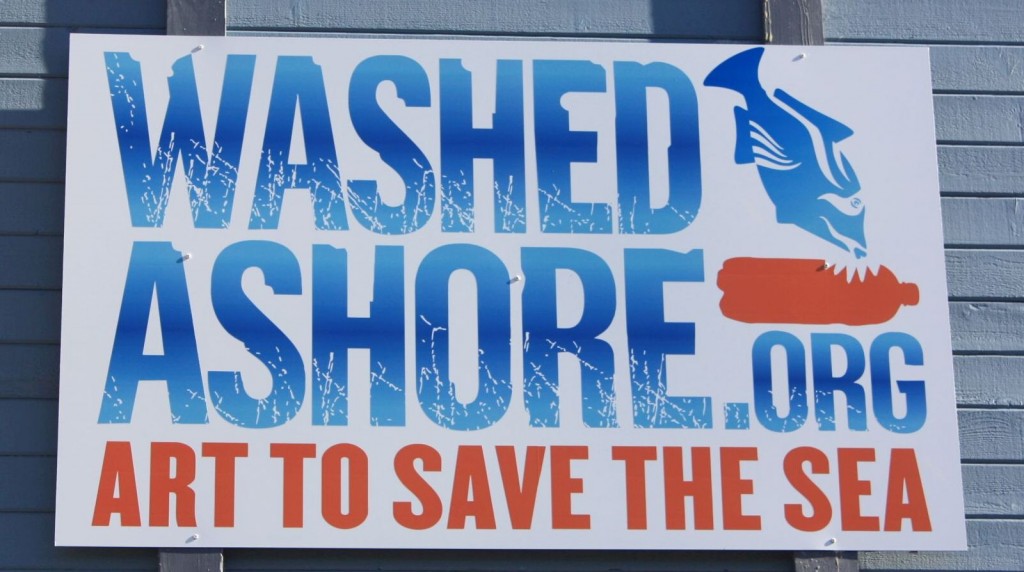 One of the must-stop spots in Old Town Bandon is the Washed Ashore Exhibit Gallery in the Harbortown Event Center. Washed Ashore is a community-based nonprofit founded by artist Angela Pozzi and uses art to educate people about the problem of trash in our oceans.

Finding her way to Bandon after a personal tragedy, Pozzi saw the tragedy of plastic and other trash washed up on the beaches and read about the impact the trash 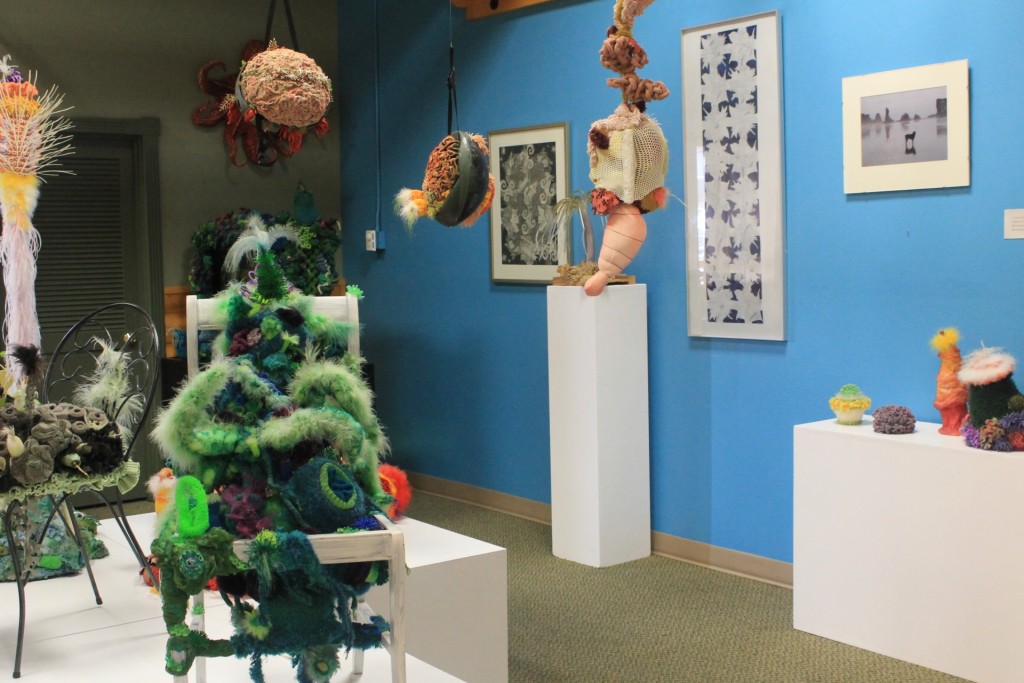 had on marine life. Animals were dying, mistaking the plastic for food or getting tangled or trapped in it. Looking for a way to make a difference, in 2010, Angela started Washed Ashore and, using the trash littering the beaches, she began creating.

Pozzi and hundreds of volunteers have since made dozens ofhuge sculptures of marine life such as fish, turtles, seals, and coral reefs, as well as other art pieces, using tons of debris from the Southern Oregon Coast. Most of the sculptures regularly travel to locationssuch as SeaWorld, the San Francisco Zoo, the VirginiaAquarium, and the Mystic Aquarium in 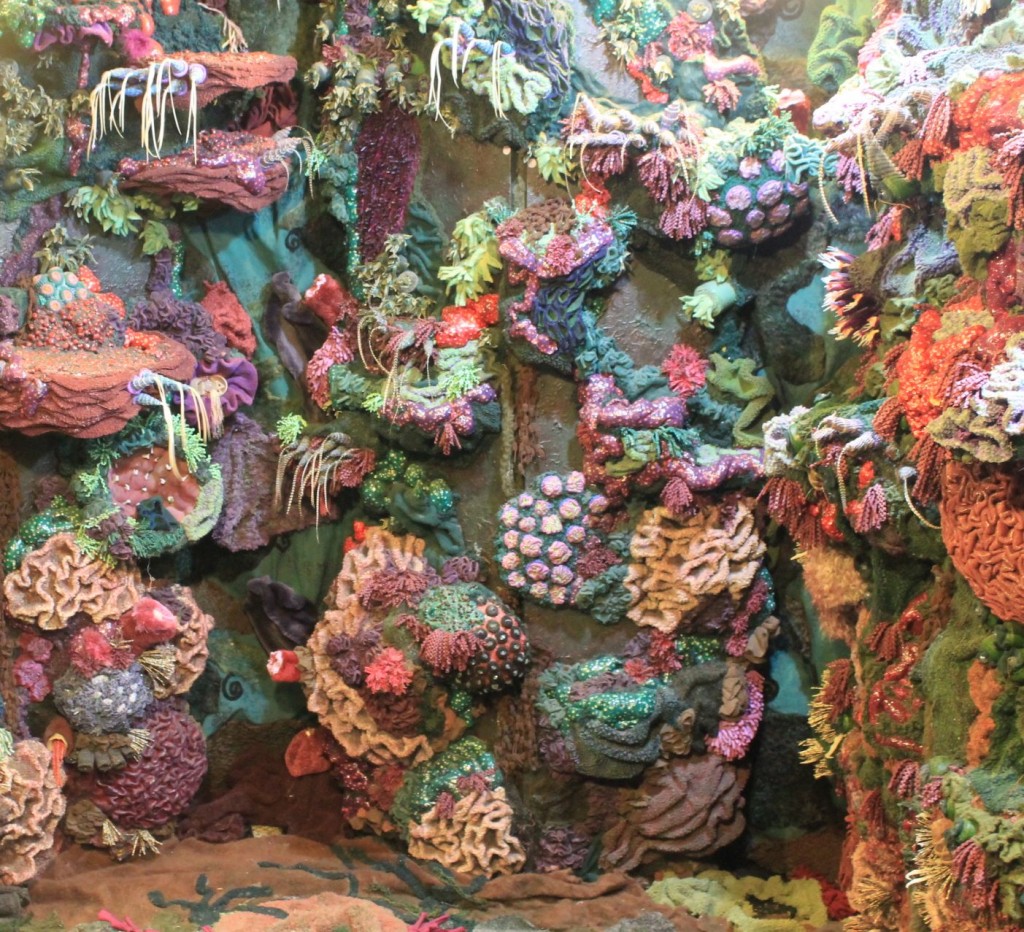 and what they can do about it.

Its not necessary to travel to one of these parks to view Pozzis masterpieces, however. A great deal of her and others art is found at the gallery in the Harbortown Event Center. Angelas Corner tells the story of how she came to Bandon and began Washed Ashore. Some of her earlier work is on display there, including the Bioluscence Sea Cave, inspired by the sea and consisting of materials such as old sweaters, blankets, and stuffed animals she found at thrift stores. Stepping into the cave and closing the curtains turns off the lights, andthe experience changes as the sea life glows in the dark.

The Washed Ashore Exhibit Gallery is unlike most art galleries. It is not just a place to view art; its a place to experience it at many levels. The experience begins the minute one walks through the door. 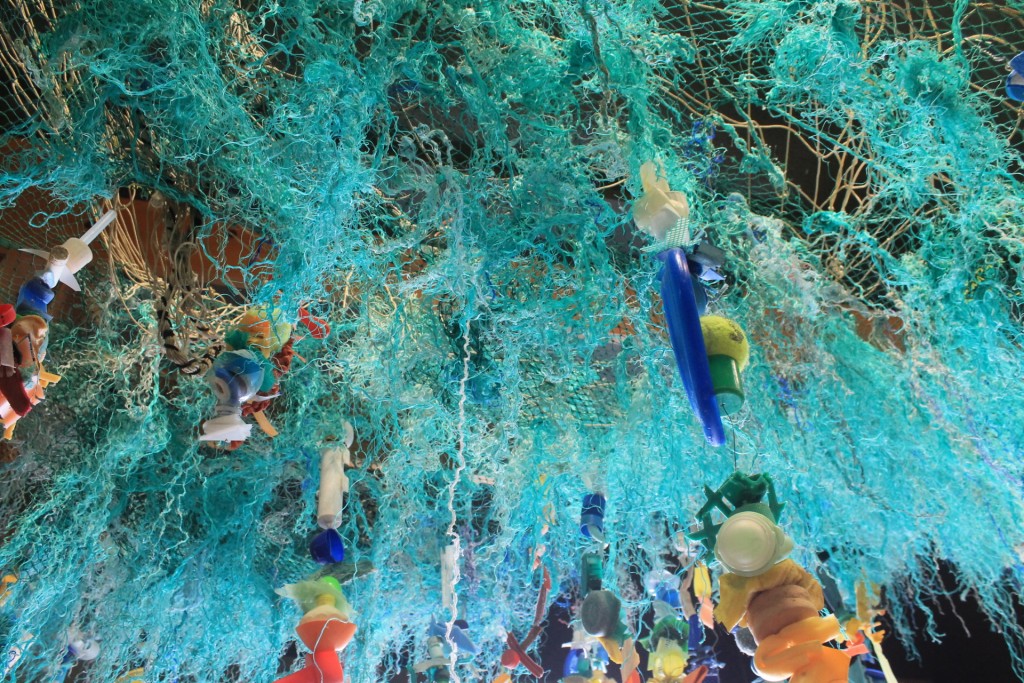 Visitors feel theyre underwater as above them they see what looks like the bright aqua color of the underside of the oceans surface. Dangling from it are strings of brightly colored pieces of plastic that look pretty, until it becomes clear that the piece represents huge amounts of trash floating in the water. The nearby sign explains that it was created to show what happens when tons of plastic trash from all over the world get stuck in a gyre, a large, slowly spinning vortex of ocean currents. Over time 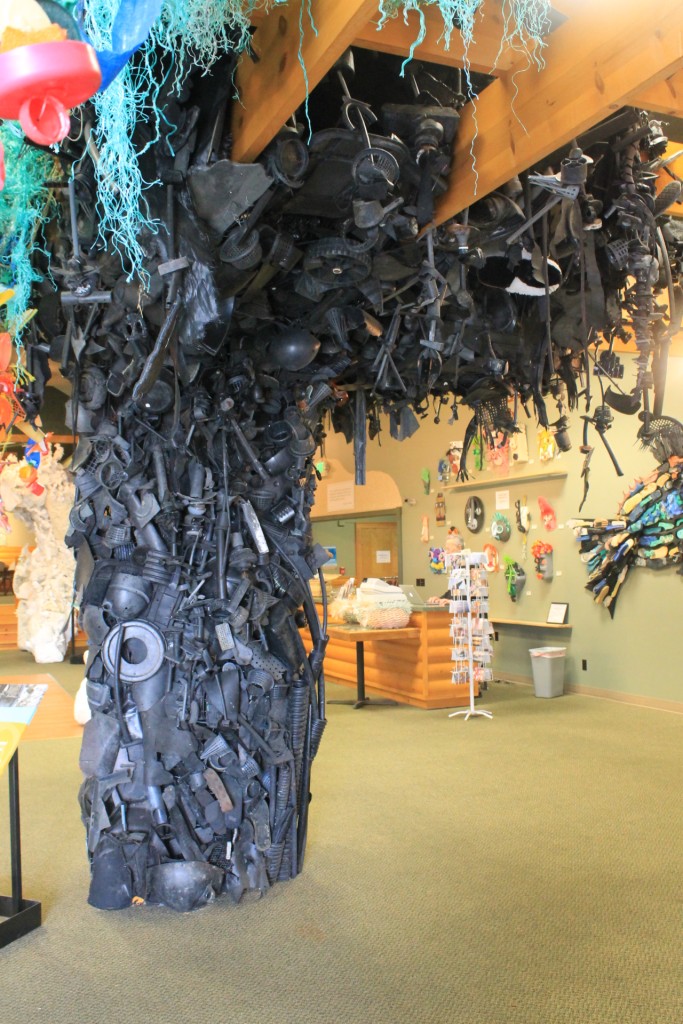 and sun exposure, these plastic soups begin photo-degrading into toxic dust which infiltrates the oceans ecosystem, threatening millions of species.

Just next to the Gyre is a large black sculpture representing an oil spill, which, as many who live in coastal communities know all too well, is something devastating to marine life and ecosystems. While oil spills get a great deal of media attention for a few days, the explanatory sign points out that the ever-present and increasing plastic pollution in the ocean is an oil spill of a greater magnitude. Petroleum-based plastic products come from individuals carelessly purchasing and disposing of non-biodegradable items and packaging, and an alarming number of them end up in the oceans.

As people continue into the gallery space, they are drawn into what appears to be the rib cage of a huge marine mammal. It is, in fact, built to be the same size as a baby whale. 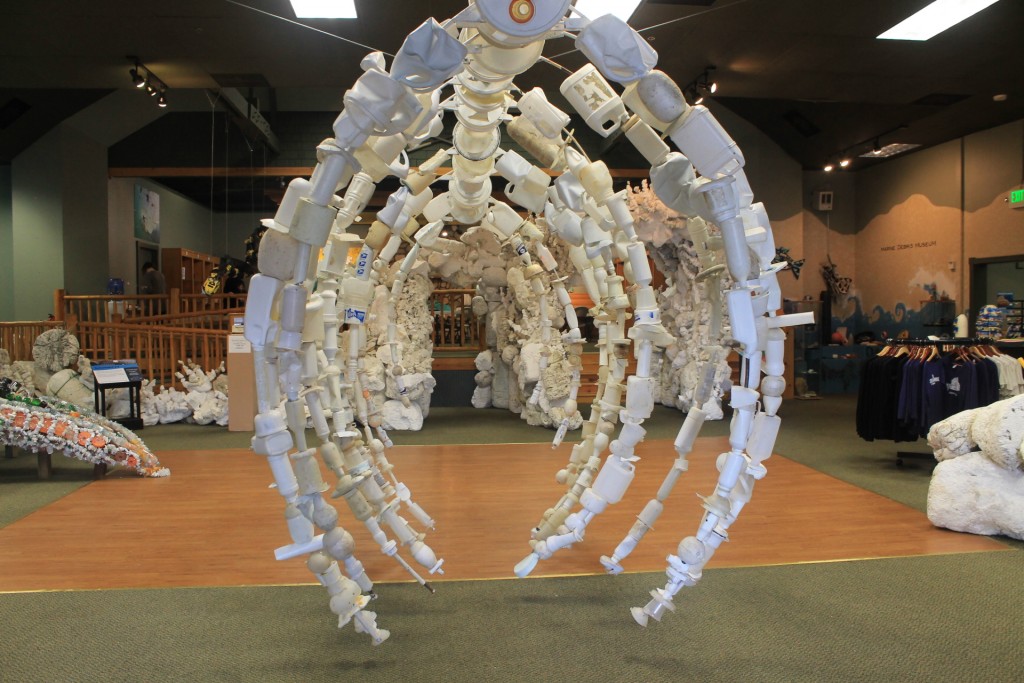 This particular piece of art is not meant to be seen and not touched. It is part of a musical set of pieces and can be drummed on with nearby drumsticks. 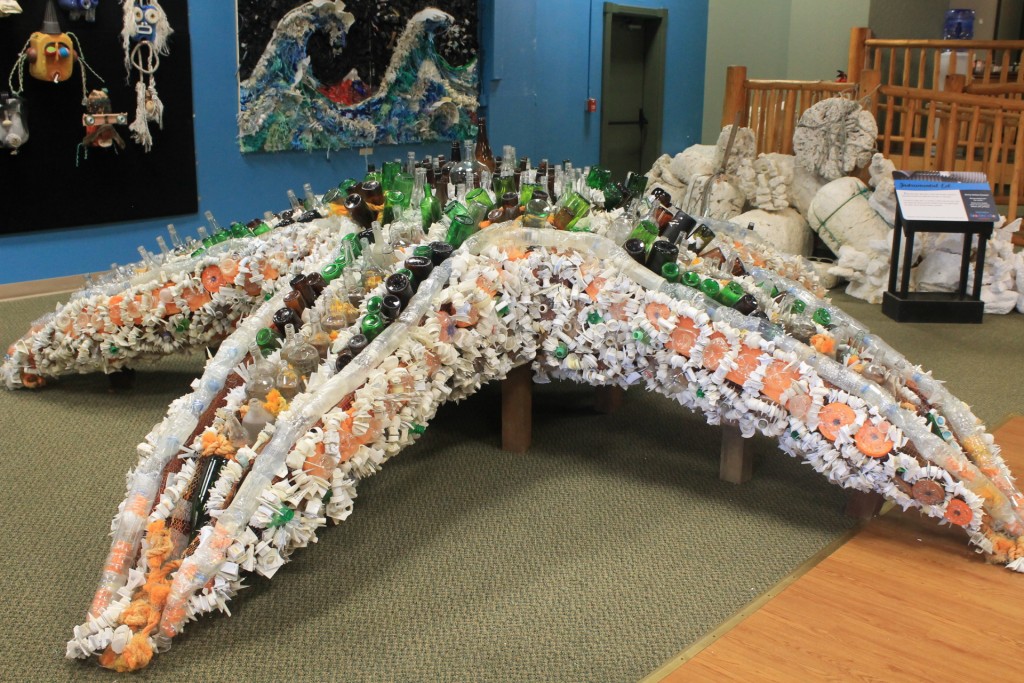 Another musical sculpture in the shape of a giant sea star sprawls across the floor near the whale bones. The sea star is made chiefly of glass and plastic bottles, some of which are filled with water and tuned to the key of E flat. Many of the plastic bottles used in the sea star floated across the ocean to Oregon from the 2008 Bejing Olympics. Gently drumming on or blowing across the glass bottles creates fun music, but the sign reminds musicians that sea stars ingest micro particles of plastic.

Hanging from the ceiling just beyond the whale bones is the Musical Eel, made partially of corrugated piping and cans. Running a mallet down its back produces a sound like a washboard and other percussion instruments.

Although most of Washed Ashores art is designed by Angela Pozzi and created by volunteers, at times local artists are given the opportunity to donate their creativity. 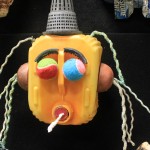 On one wall hang a number of masks known as the Plastic Tribe, put up in early 2015. Artists came to the gallery for a 3 day workshop, were given trash and prep 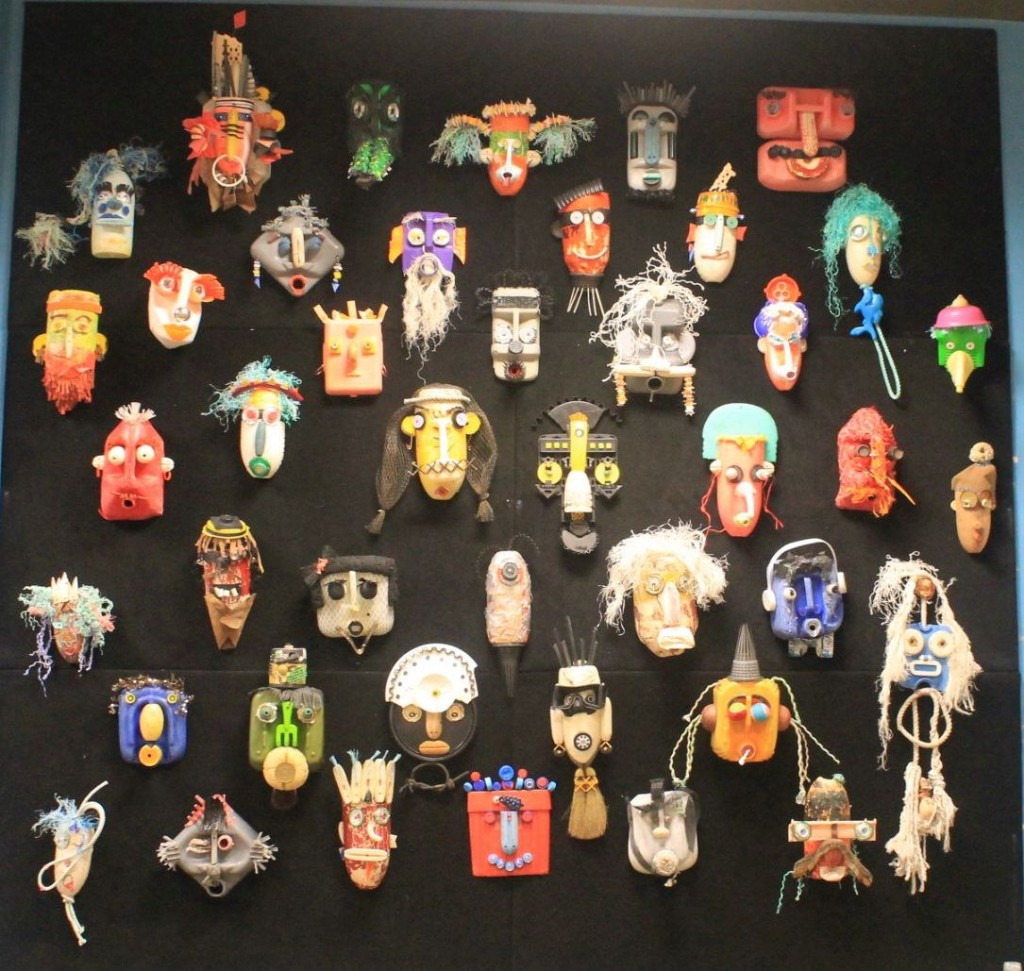 supplies, and were left alone to do their artistic thing. The wall of colorful masks is the result. 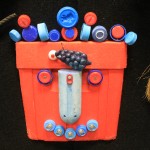 Through a representation of a bleached coral reef made of Styrofoam and up the few steps is the workshop area where volunteer groups and individuals do the work of preparing and building pieces of sculptures in progress. The projects are arranged by level of difficulty and 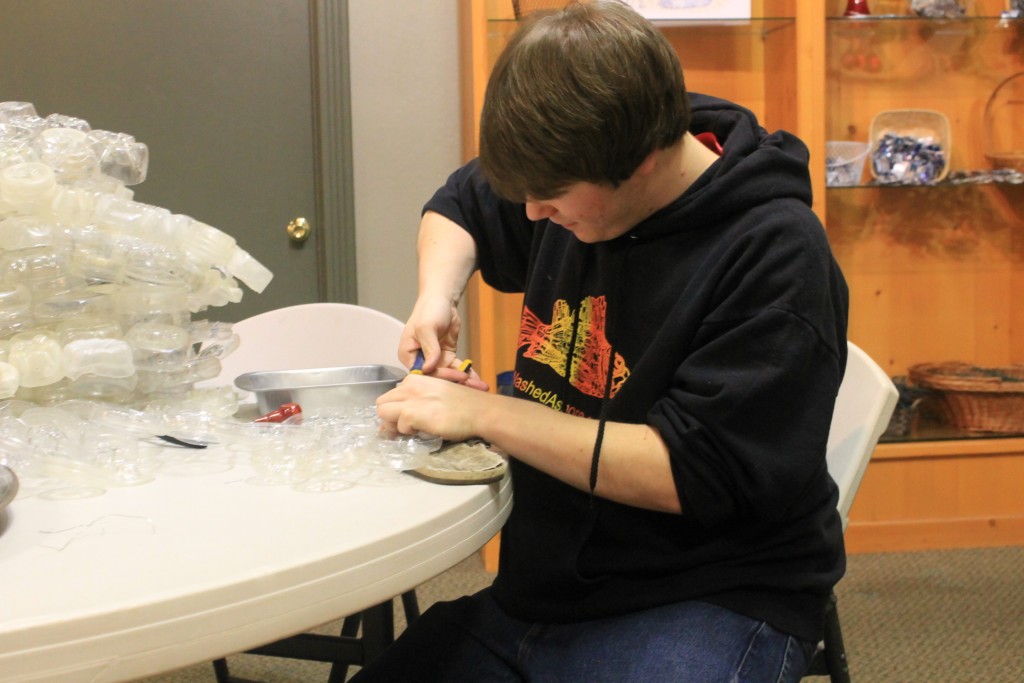 complexity, and there is something for everyone to do, from shredding rope to threading plastic onto wire to stapling plastic together to create fish scales. Everyone from school groups to regular locals to tourists passing through are welcome to come in and be part of the community effort Washed Ashore depends upon.

Looking closely at all of the sculptures and masks, one can see the individual pieces of trash that have been made into art. Shoes, toys, bottles and bottle

caps,tennis balls, aluminum cans,and rope are some of the identifiable bits, and the rest is made up of hundreds of thousands of pieces of plastic that have been cut to specific sizes and shapes for a particular sculpture. All of the trash is its original color.

The trash used for Washed Ashores art, 95% of which is petroleum-based (typically plastic), does not come to them ready to be used in a creation. It comes first to Art 101 about 7 miles south of Bandon on Highway 101, the grungier side of Washed Ashore. There, it is sorted into big bins, washed, and cut, and although about 98% is used in the art, some unusable pieces are thrown out. By the time it gets to the gallery in Old Town, the trash is refined and ready to be made into pieces for sculptures in progress. Once the various pieces have been made, they go back to the Art 101 site where they are put onto big welded frames built on site. 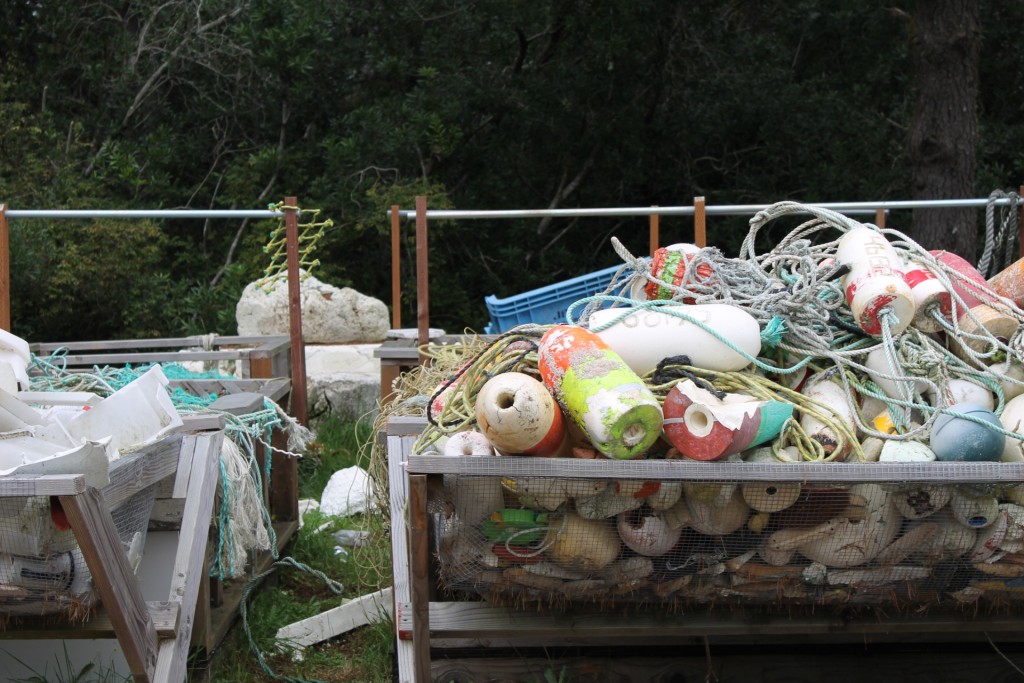 Washed Ashore could not exist without the work of thousands of volunteer helpers. Besides putting together pieces of sculptures, volunteers can also help by picking up trash from the beaches either on their own or through organized efforts with groups such as SOLV and dropping the trash off at Art 101. At Art 101, help is always needed to scrub, sort and organize trash, and at the Washed Ashore gallery people who wish to interact with the public can donate their time as a docent, running the register, or helping with the office staff.

Not only does volunteering benefit Washed Ashore, but it offers profound rewards to the volunteers. Volunteering helps tie people to the community and widen their support systems; develop social, employment, and general life skills; maintain mental and physical health; and live a longer and happier life. Washed Ashore further rewards volunteers by offering a punch card. One hour of volunteering at the gallery, Art 101, or picking up trash on the beach earns one punch that can be redeemed at several Bandon businesses for benefits such as discounts and freebies. A full punch card with 10 punches earns one of several bigger rewards. Learn more by visiting or calling Washed Ashore.

Monetary donations are also very happily accepted and are depended upon to help pay Washed Ashores few employees, rent, art materials, and education materials. They emphasize that no donation is too small nor too large; $5 will buy two spools of stitching wire, $40 will buy a roll of chicken wire, and $2000 will pay for handouts and brochures for thousands of school children.

As visitors leave Bandon and head south on Highway 101, one of the last things theyll see is an enormous 14-foot tall bird standing proudly at the Art 101 site with its wings spread, a reminder of the tragedy and enormity of our trash problem but also of the hard work and vision of people like Angela Pozzi and the folks of Washed Ashore to deal with it in a constructive and beautiful way. 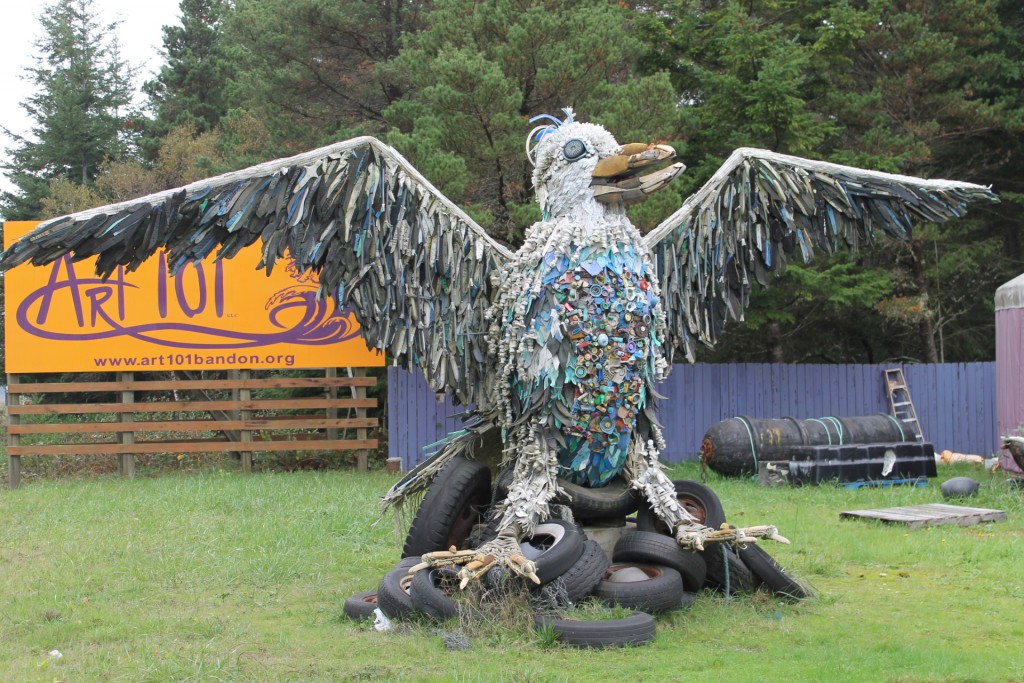