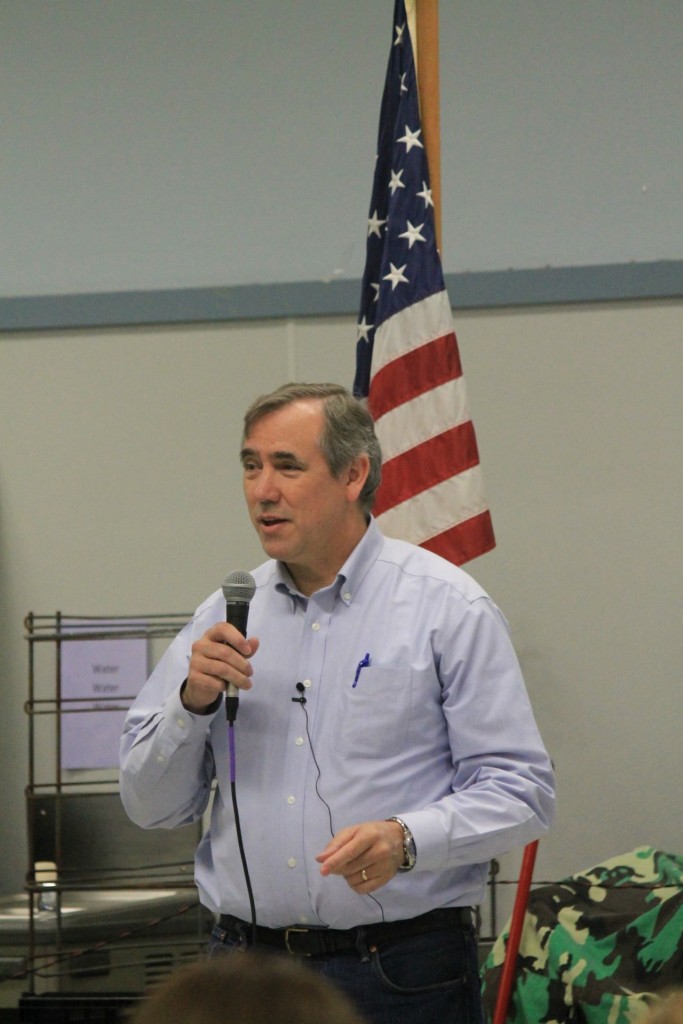 Every year, U.S. Senator Jeff Merkley commits to visiting each of Oregons 36 counties and holding a Town Hall. Bandon was honored to host this years Coos Countys Town Hall on Wednesday where about 140 community members came to ask Senator Merkley questions and give him feedback on important local issues to take back to Washington D.C.

After a welcome by Bandon School District superintendent Diane Buche and the Pledge of Allegiance led by a Harbor Lights Middle School student, Bandons City Council president Claudine Hundhausen introduced Senator Jeff Merkley, a native Oregonian whose family was involved in the timber industry. The senator then took the microphone and wasted no time acknowledging local greatness: the number of high school students in the room, the elected community leaders, and Leslie Clarke who represented Bandons ASPIRE program which helps high school students explore options and prepare for their lives after high school.

Senator Jeff Merkley took a few minutes to update the group on some issues facing Washington DC right now, all with short timelines: the quickly dwindling Highway Trust Fund, soon-to-expire sections of the Patriot Act including legislation regarding collection of phone records, and the recent adoption (and his concerns about) by the Senate of the Fast Track legislation which would pave the way for the Trans-Pacific Partnership (TPP). He received rather enthusiastic applause from many folks when he mentioned his no vote on Fast Track.

Despite Merkleys passionate feelings about Fast Track and the TPP and his willingness to discuss them further, the audience did not even approach issues regarding trade. Questions did cover local and national issues including the protection of the local cranberry industry, veterans benefits, Oregons high school dropout rate, fracking, big banks, corporations and lobbyists, andabortion.

Senator Jeff Merkley addressed each question respectfully, obviously aware that the questions wouldnt be posed if they werent important to the community. Without dodging or doublespeak, he answered each question directly and as fully as he was able to. He spoke remarkably easily and off the top of his head about nearly every issue raised, and when he was unfamiliar with a topic, such as some specifics about the cranberry market, he committed to following up and learning more.

Andrew P., a Bandon High School junior, asked the senator a question relevant to many Bandon residents. He asked about action that has been or can be taken to protect local cranberry farmers from an oversupply of cranberries and lowered prices as well as whether or not the senator has considered giving incentives to big companies such as Ocean Spray to purchase local cranberries instead of purchasing berries from international markets. After opening it up to any potential cranberry experts in the room, Jeff Merkley referenced action he took in response to the communitys earlier request to have the state buy local cranberries for the school lunch program. He mentioned that he and others are promoting local products internationally, and assured the audience that with the help of his field representative, he will follow up and learn more about what he can do to protect local growers.

Bandon High School senior Rose G. brought up articles she has read about Oregon having the highest high school dropout rate in the country and asked the senator what he is doing in Oregon and in Washington DC about this issue. Merkley said that when he has talked to educators across the state, their explanation for the highrate is a lack of funding. He explained that in Oregon, funding for education has shifted from property tax to the state which causes a yearly or every-other-year battle and acknowledged that Title I and Individuals with Disabilities Education Act (IDEA) are underfunded. To illustrate this point, Diane Bouche reported that Bandon schools just lost another $10,000 in Title I funding. Positing another possible explanation, Merkley said that he has been told a number of times that interestingly, Oregon has some of the highest graduation standards in the country, so it is simply more difficult to get a high school diploma than in other states.

Senator Jeff Merkley took the opportunity to segue into another issue about which is he obviously passionate. Underfunding of education, he said, is partially a result of national decisions and not about the wealth of our country. Although we as a nation are wealthier than we were 30 years ago, he explained, our class sizes are larger, college is more expensive, and Pell Grants have diminished in relation to the cost of tuition. If only 1/3 of the $120 billion a year spent on the war in Afghanistan, a war, he explained, where the strategy went way off track, it would have made a huge difference. Merkely is continuing to look ahead to try to prevent what he sees as future mistakes. He is co-sponsoring the SANE (Smarter Approach to Nuclear Expenditures) Act which would update defense spending and prevent $1 trillion being spent on nuclear weapons. The savings would translate directly into increased funding for education.

About 40 of the Town Hall attendees were Bandon High School students who had obviously spent a great deal of time preparing for the event, studying the issues and formulating thoughtful questions to ask the senator. Their preparation paid off; the students asked relevant questions that spanned local and national issues, and they were praised by Senator Merkley. Beaming, he told them they had done the best job of any high school groups hes seen with their ready and detailed questions.