It may surprise some to learn that Bandon, with its temperateclimate and crashing surf, is an ideal place for growing cranberries, and it has grown to a center of production since the berries were first commercially grown here in the 1890s. In fact, today these cranberries make up approximately 95% of Oregons and 5% of the nations crop. About 1600 acres around Bandon, many family-owned, produce around 30 million pounds of berries. Cranberries, along with blueberries and Concord blue grapes, are one of the most commercially important fruits coming from North America.

Bandons coastal climate combined with its sandy soil offer uniquely perfect growing conditions for cranberries. These conditions have helped Bandons cranberries earn worldwide renown. Native to North America, cranberry plants are actually vines, and they are grown in large recessed rectangular beds known as bogs. Despite common misconceptions, the bogs are not flooded year round; however, they do need water year-round. The wet weather gives the bogs enough water throughout the rainy months and ensures that there will be enough for harvest time when the bogs are flooded. The bogs are are irrigated in the dryer months with sprinklers, much like other crops.

The mild autumns on the Southern Oregon Coast mean that Bandon cranberry farmers have a longer growing season than farmers on the east coast. Growers from the east coast are forcedto harvest their berries in late-September, while harvest time in Bandon happens between mid-October and early December. This extended season produces hardy berriesand allows them to achievethe dark red color Americans have come to rely on for their Thanksgiving and Christmas meals, compared to paler berries from the east. Some of Bandons berries are sent to the east coast to mix with the berries there to improve their color. These riper berries also have a naturally higher sugar content, so cranberry juice with berries from Bandon require less added sugar. 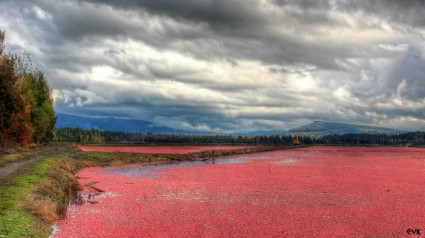 At harvest time, the bogs are flooded, and a special piece of equipment called a reel is usedto loosen the cranberries from the vines. The berries then rise to the surface where they can beskimmed off and loaded into trucks. Most of Bandons cranberries are madeinto juice concentrate or are frozen, while others are sold fresh, some dried, and some made into candy, condiments, bagels, wines, and more that are sold at shops in the local area.

Interested in learning more and maybe seeing some of the action for yourself? Some local farmers offer tours of their bogs during harvest time. Visit Bandon the second weekend of September, and you can take part in the annual Cranberry Festival.Click herefor more information on this fun-filled weekend!