No trip to or through Port Orford would be complete without spending some time at Port Orford Heads State Park. This is a great stop for history buffs, hikers, picnic-seekers, and those interested in local museums and is great entertainment for the whole family.

In the late 1800s and early 1900s, there were numerous shipwrecks along this section of the coast, and this prompted the construction of a Coast Guard lifeboat station in 1934 at what is now the state park. The servicemen called "surfmen" formed 8-man crews, and their job was to identify and rescue ships in distress. This was no easy task as these ships were often in distress as a result of wild storms, and the crews risked their lives to save the sailors. 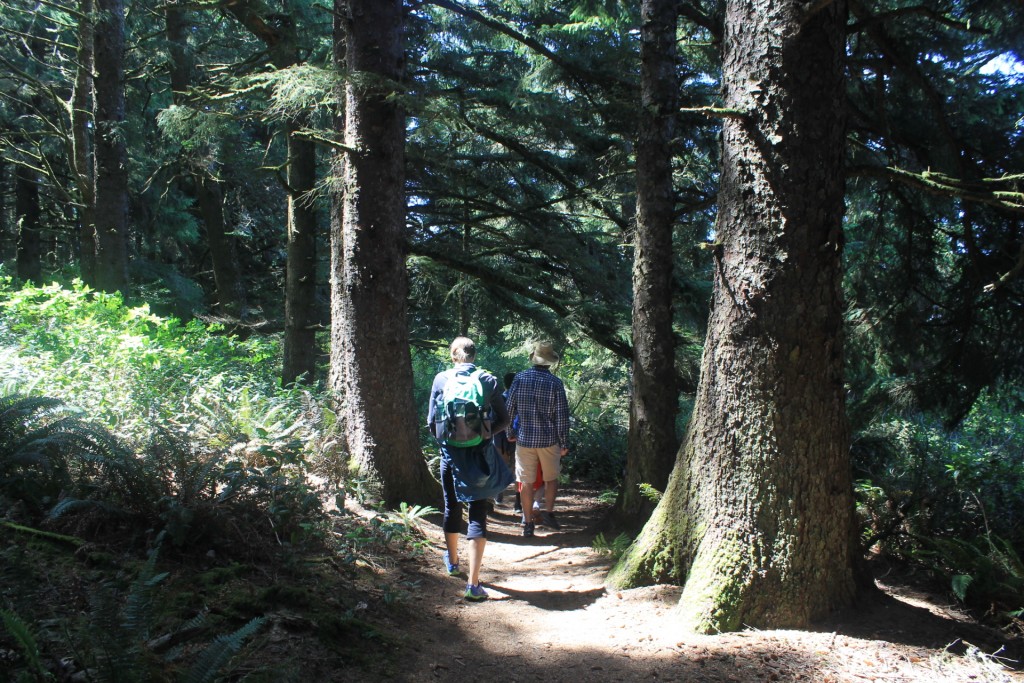 For a varied, beautiful and exciting hiking experience, you will have three trails to choose from, but if its possible, its well worth it to try them all. Each trail is relatively short, but together, they may take about an hour, depending on how long you stop, rest, and explore. A caveat before you begin; watch for poison oak. Most can be avoided, but long sleeves and long pants are advised, especially on the Cove Trail.

Besides the poison oak, some of the many plants you will see along the way include irises, salal, shore pines, foxgloves, ferns, pines, huckleberries, fir, horsetail, and Oregon grape. 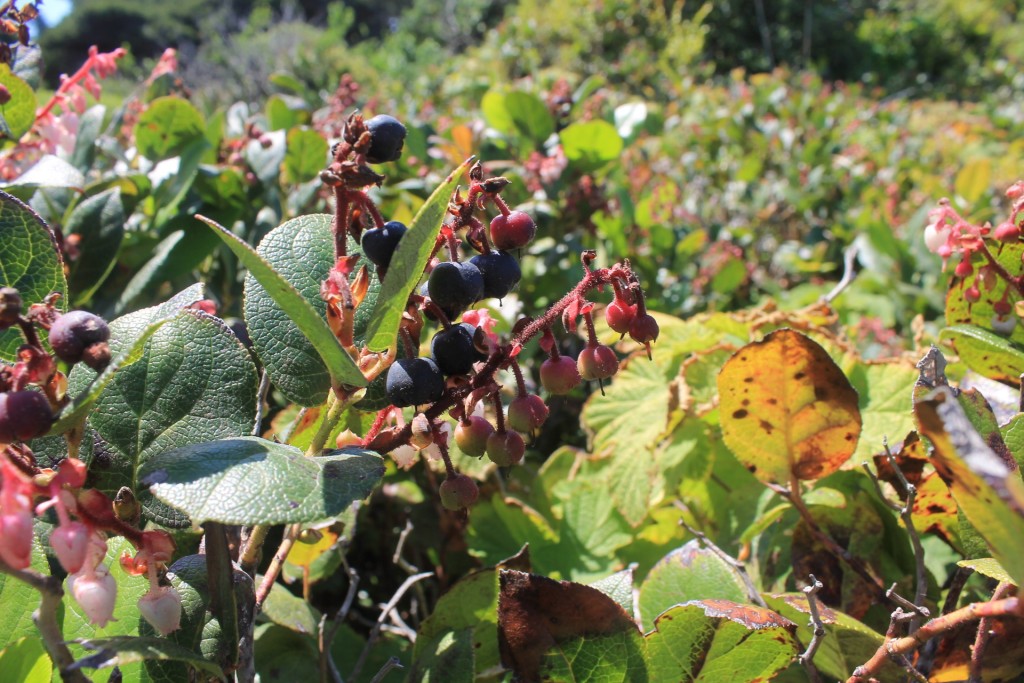 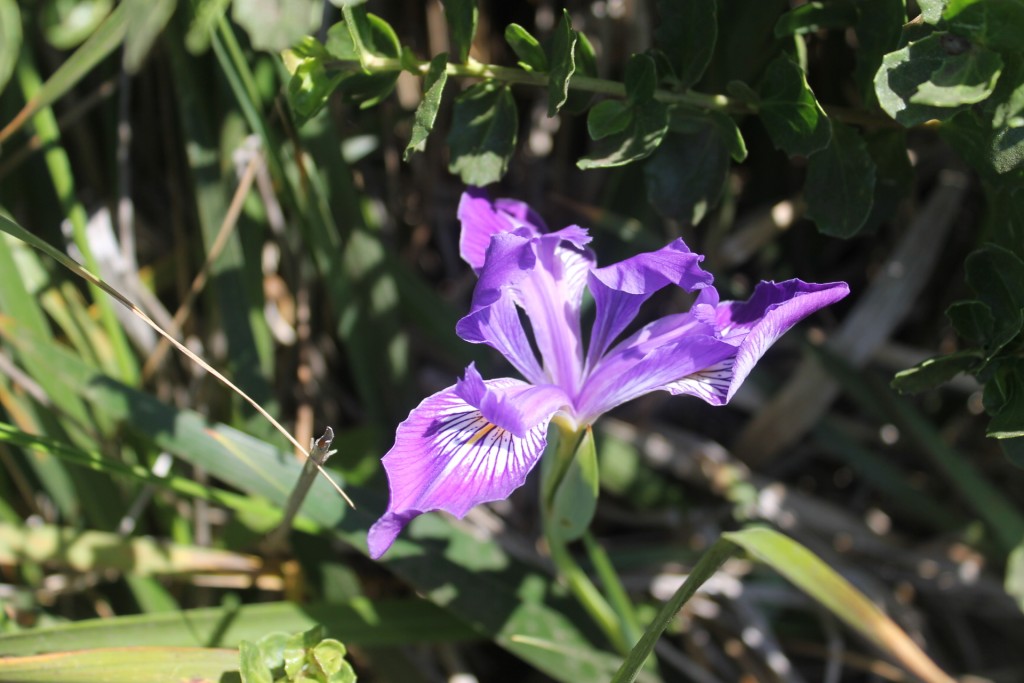 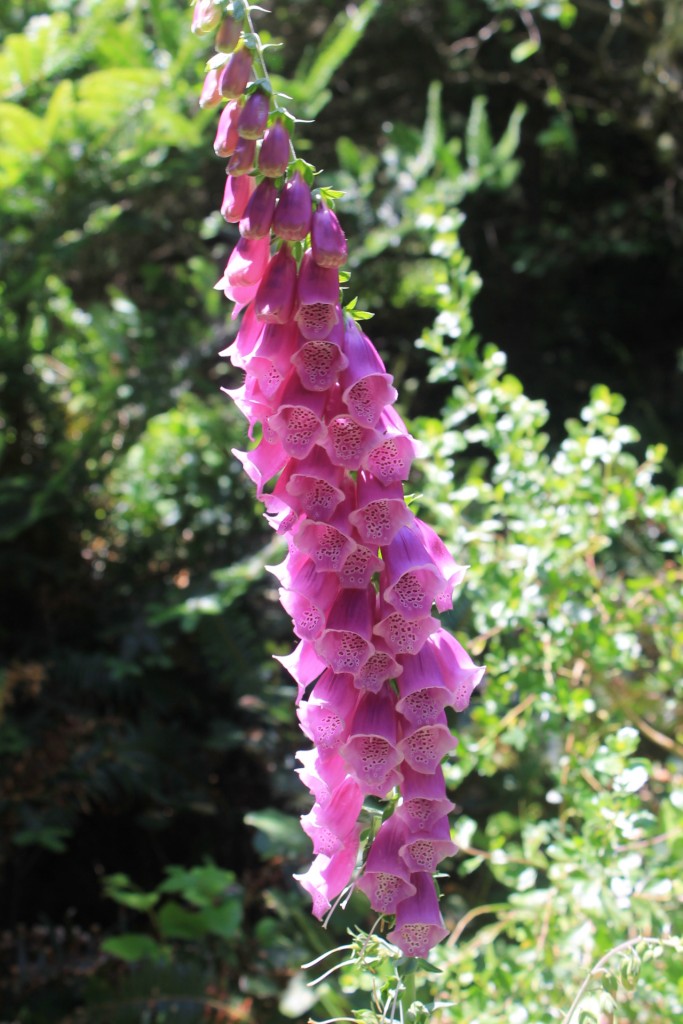 From the parking lot, I like to start out on the Headlands Trail. The trailhead is not marked, but it is fairly obvious. Youll enjoy a nice walk in the woods, and the trail eventually opens up to low shrubs sculpted by the wind and then to the first glimpse of the amazing views along the trail. 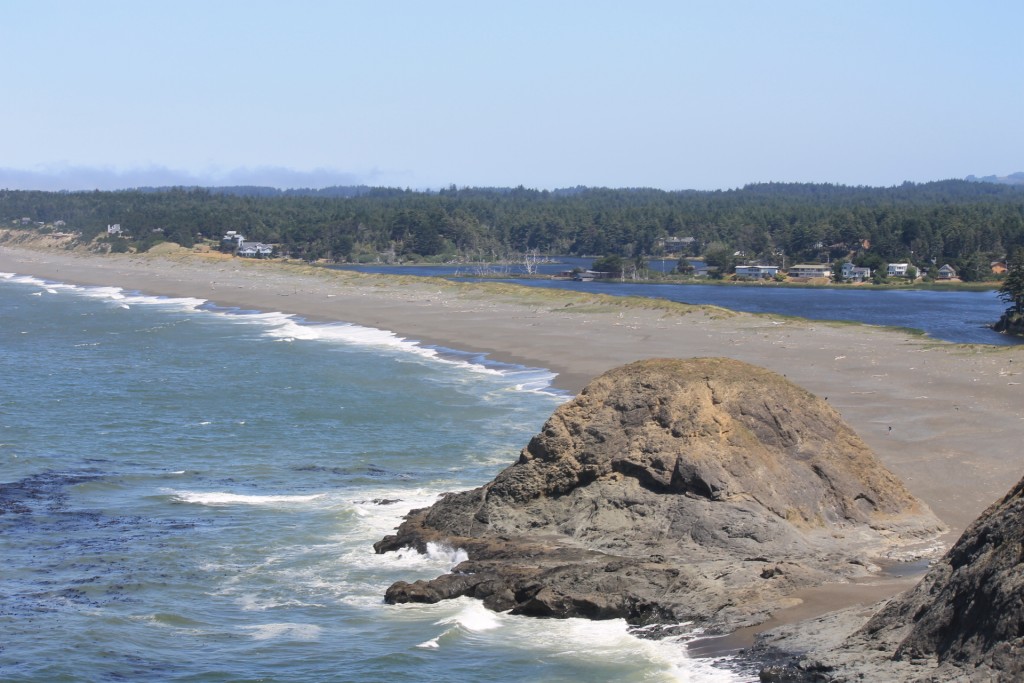 Follow the trail around along the edge, and look down; you might catch some harbor seals sunning themselves. At the end is a point from which you can look north and see Port Orfords Garrison Lake in the foreground and beyond to Cape Blanco. 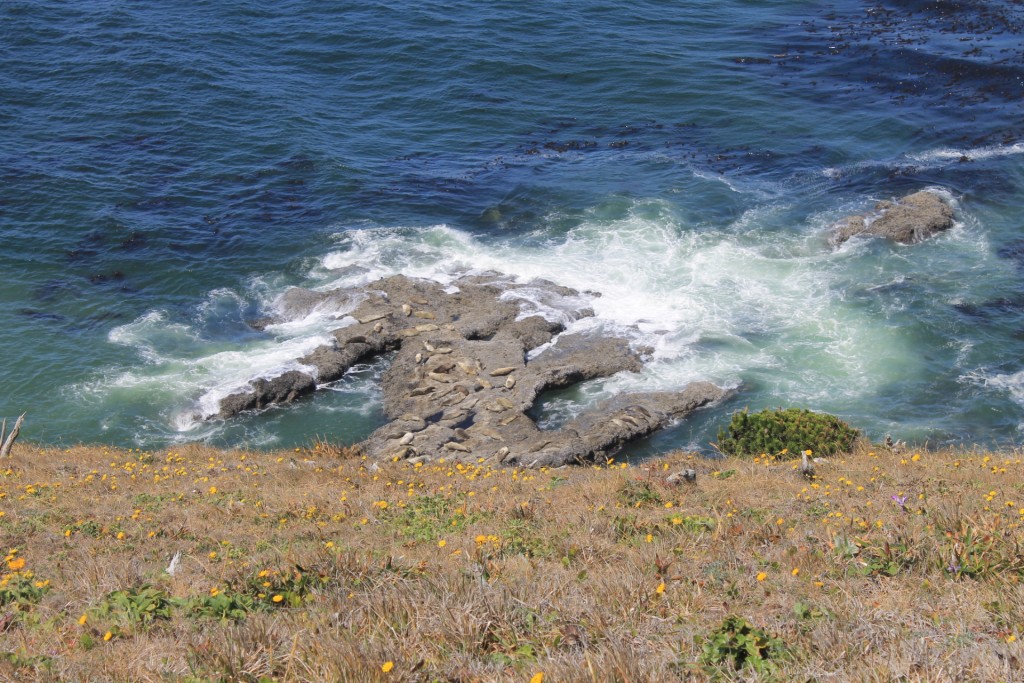 From this viewpoint, turn back and stay right at a fork in the trail to get onto the Tower Trail, and you will come to the site of the old Coast Guard 37 foot high watchtower. Still visible are the footings and the base for the staircase, but the tower itself was closed in 1970 and subsequently removed. From the tower, constructed in the mid-1930s and manned 24 hours a day, a Coast Guard surfman could see 40 miles south to Cape Sebastian and as far north as Cape Blanco, keeping an eye out for ships in distress, emergency signals, and during WWII, enemy ships, airplanes, and submarines. 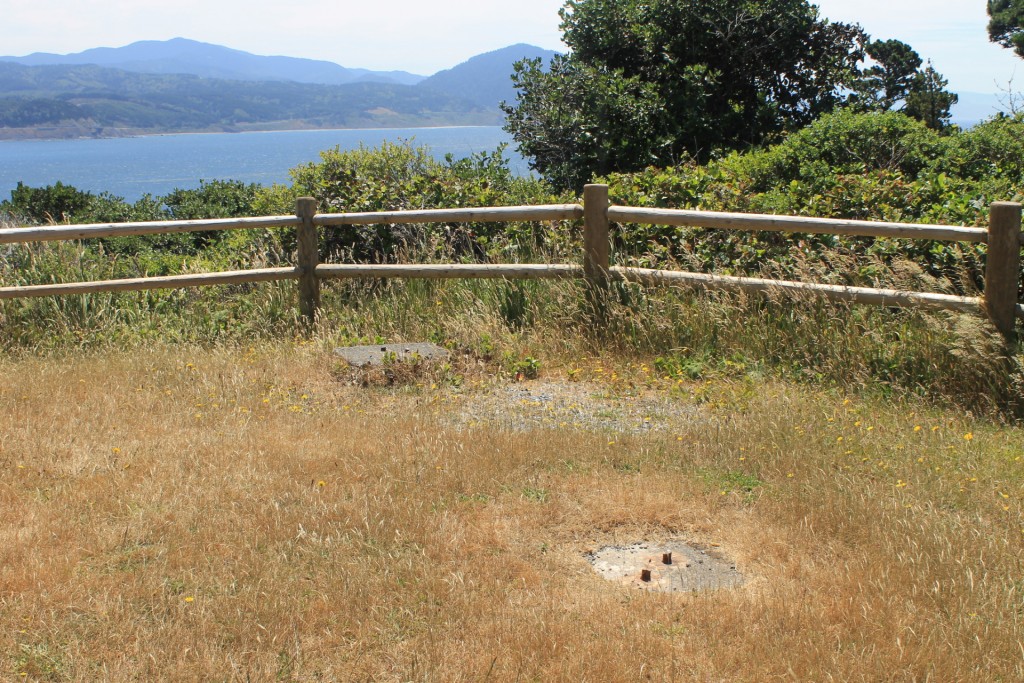 Today, the wide grassy area, views, informational signs, and bench make this a good spot for resting and having a snack mid-hike. 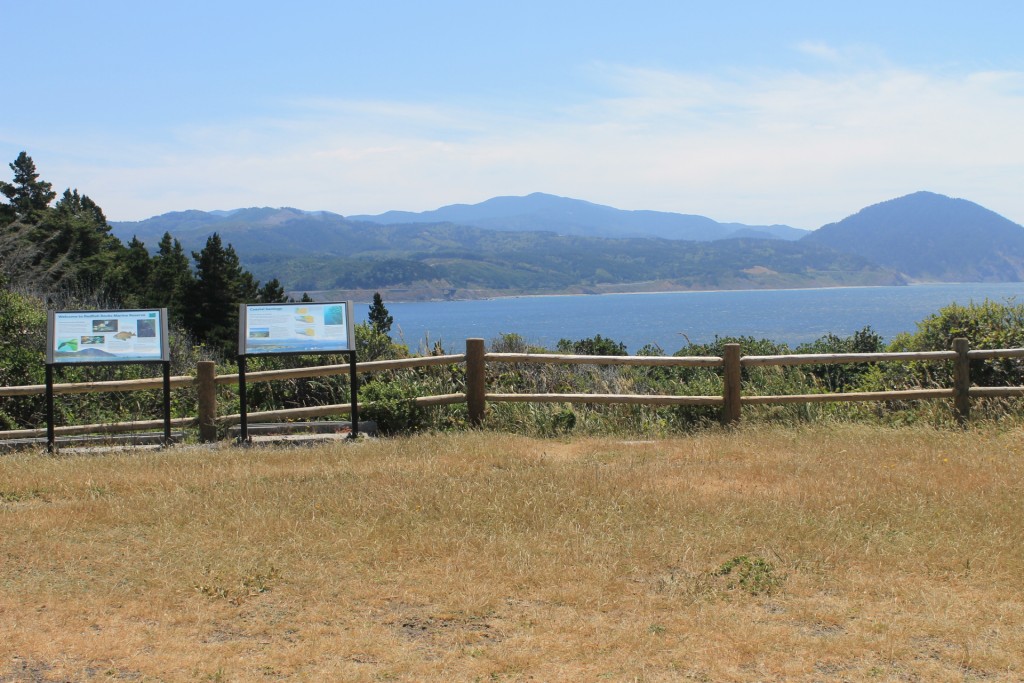 Stay to the right on the dirt path after departing the tower site, and you will come across another viewpoint. From here, you can look down at the remains of the structure used to launch the lifeboats used to rescue ships in trouble. Now, look to your right and picture a raging Pacific storm, and you can start to appreciate the skill and courage it took to be on one of these crews. 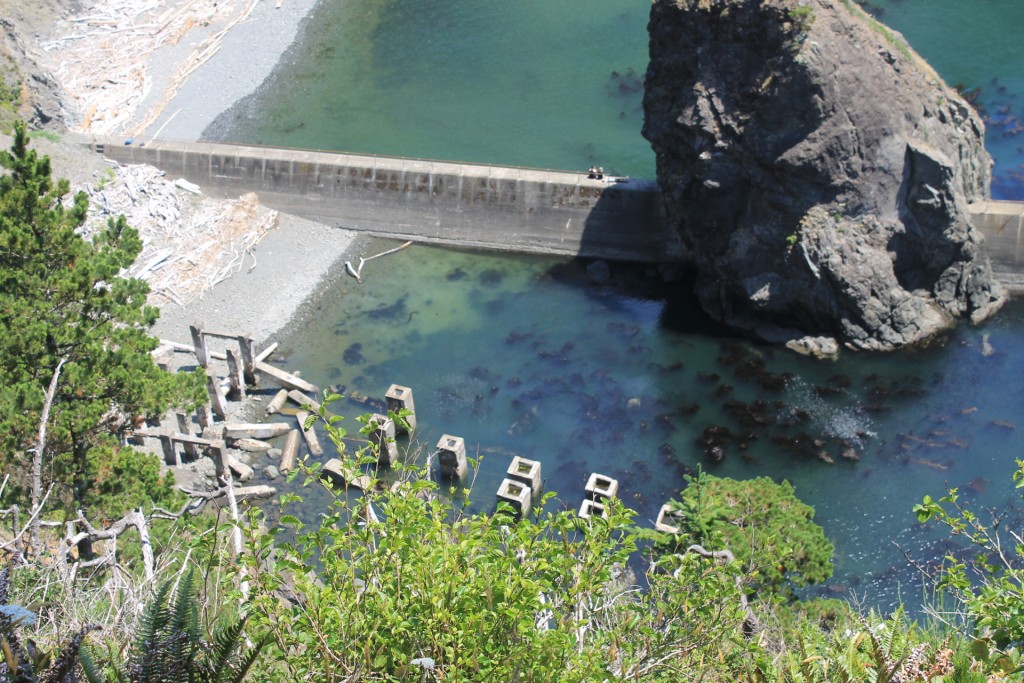 The Tower Trail will lead you to the Lifeboat Station Museum, but you have one more trail option, the Cove Trail, which starts near the entrance of the museum. This will take you down to the cove where the lifeboats were launched that you saw from the Tower Trail. This trail is not for the faint of heart, but that being said, it was successfully navigated by this hiker, 3 adult friends, and 2 children ages 5 and 9. The trail begins benignly enough down some steep stairs, but the stairs disappear, and hikers must make their way down the rest of the way on the dirt trail with the help of a rope that serves as a crude banister. 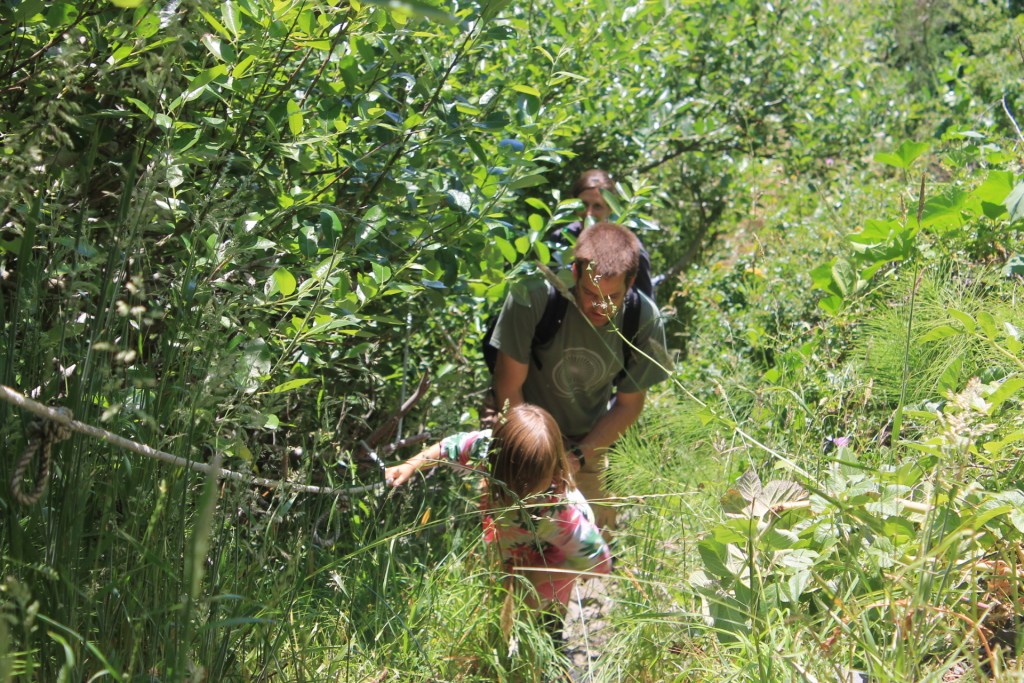 The experience is worth the effort, however, as you get down to a beach with interesting rocks, plants, birds, and sea creatures as well as the hulking chunks of concrete. Spend some time climbing around and again appreciating the surfmens jobs. 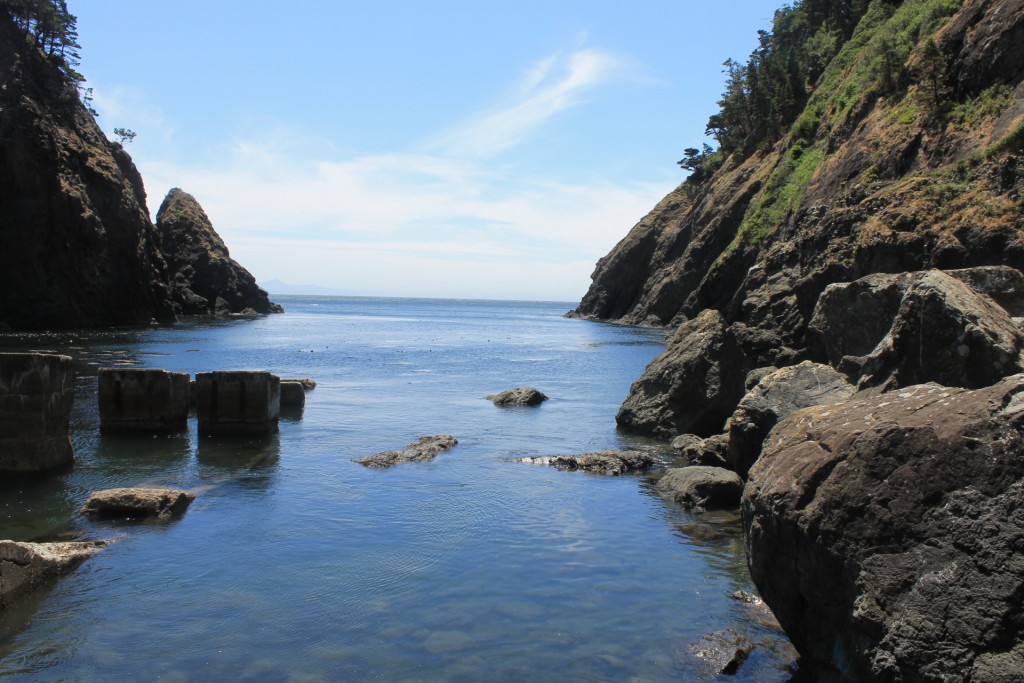 The climb back up is somewhat easier, but a rest is well-deserved, and a seat on the grass or the chairson the museum's porch will do the trick. Once you have regained your breath, take a trip through the museum which once served as Coast Guard barracks and office buildingwhere you will learn more about the area and the Coast Guard surfmen and how they lived. The museum is free, but donations are accepted. Its well worth your time to take a look; even our young hiking buddies were interested in what they saw! 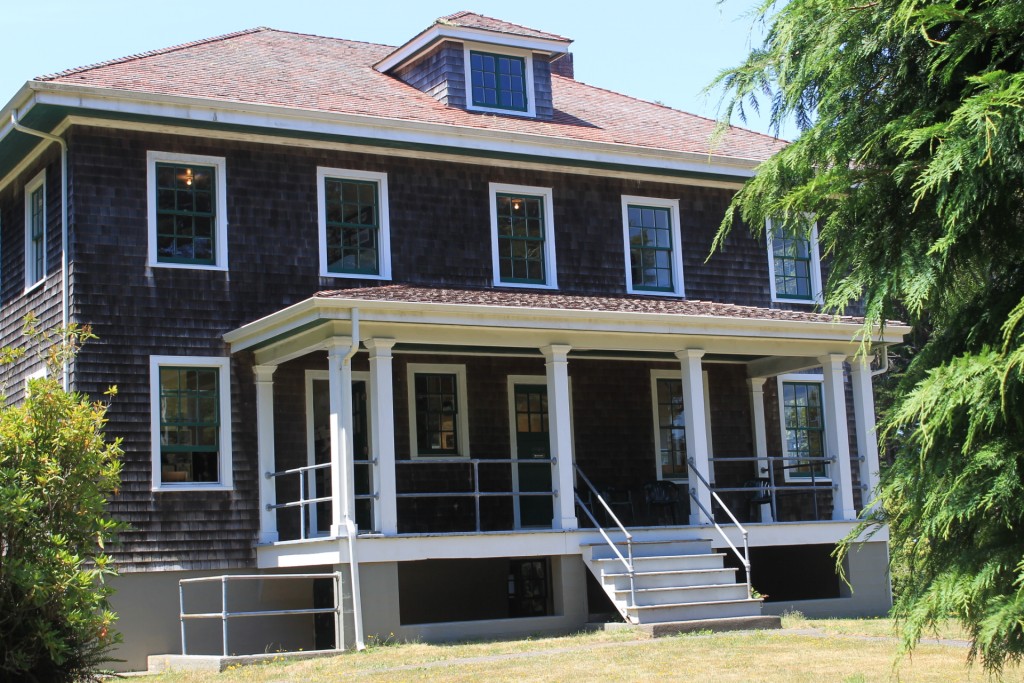 On your way back to the car, stop and marvel at the 36 foot refurbished self-righting motor lifeboat on display. Its crew once saved 24 sailors from a ship in trouble during a December, 1941 storm. 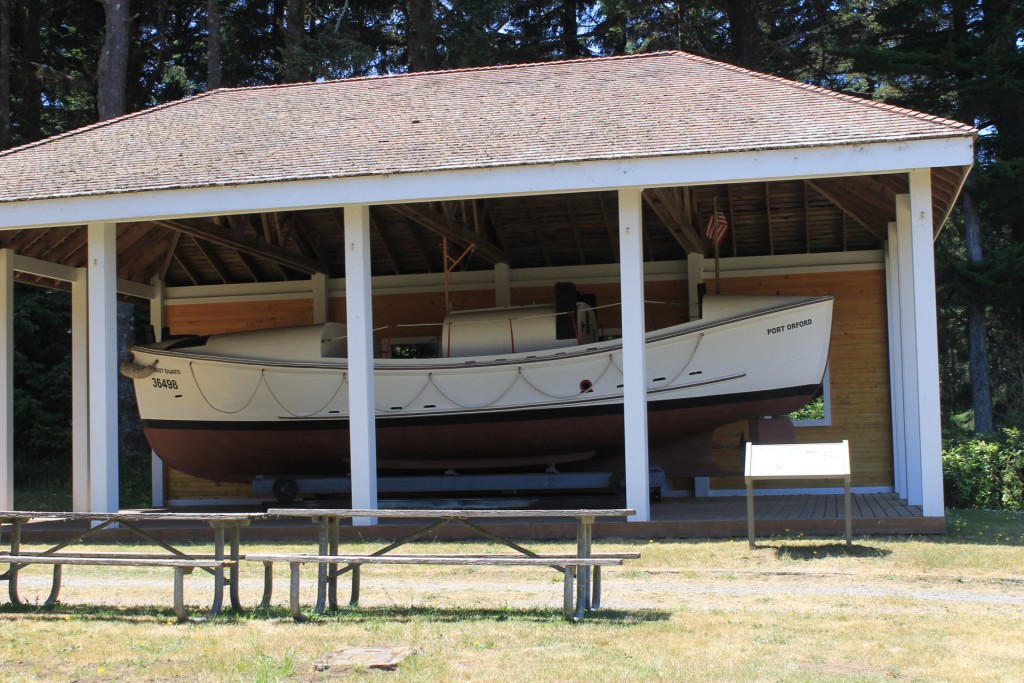 For a post-hike treat, Port Orford offers plenty of options. Tasty Kate's has many sweet and savory choices, Crazy Norwegian Fish & Chips has many fried delights, and the Port Orford Co-Op is a good choice for a piece of fruit or some healthy packaged snacks, and for lunchtime, they also have sandwiches, salads, and typically a hot dish ready to serve.

To get to the park, turn west onto 9th Street from Highway 101 in Port Orford, and head up the Coast Guard Hill to the park. There is a small sign at the intersection, but its easy to miss, so watch for the road.

The park is open for day use only from April 1-October 31, and the museum is open every day but Tuesday from 10-3:30.