This weekend, don't let the gloomy weather keep you in the house. Head up to Coos Bay to see the Dolphin Players' latest production, "Ha!" by Rich Orloff. It promises to be an evening of entertainment, laughs, and even a bit of history, both real and imagined.

"Ha!" is a collection of Rich Orloff's most popular three one-act comedies published between 1997 and 2007. "Oedi" is a parody of the Greek tragedy "Oedipus Rex," a humorous look at the origin of Freud's Oedipus Complex. "The News from St. Petersburg" attempts to lighten up the normally gloomy writings of Anton Chekov. The finale, "The Whole Shebang," ponders the thought that perhapsthe heavens and the earth arejust some nerd's science project. 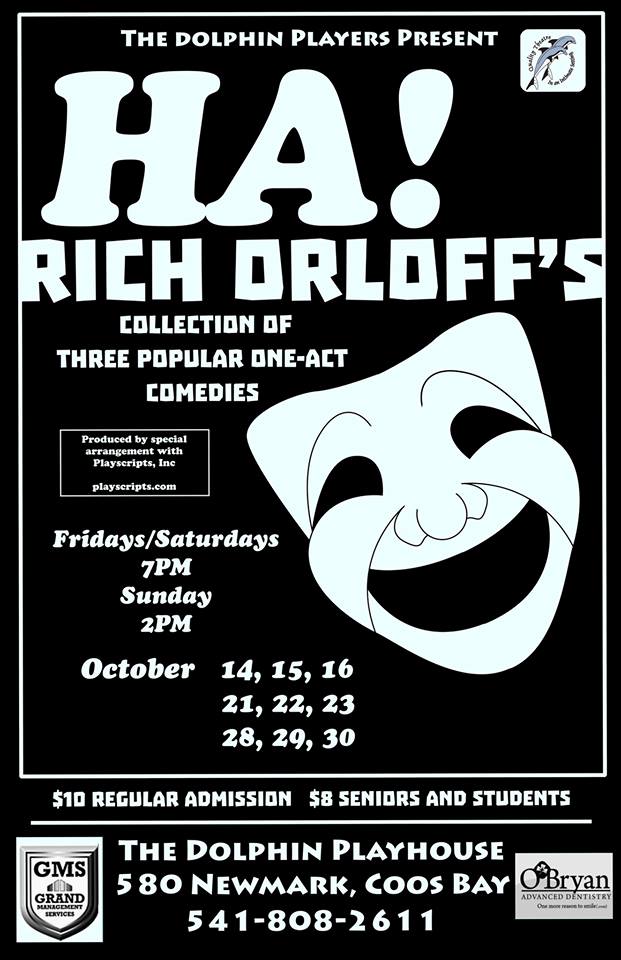 The Dolphin Playhouse, located on Newmark in Coos Bay across from the Tokyo Bistro, is community theater at its best. Directed by Levi Goodman, the cast of "Ha!" (two of whom are from Bandon) is made up of actors whorange in age from their teens to their 60s and whose occupations range from student to teacher to retail to retired. The Dolphin Players' experience also varies widely, but they have all worked together well to createa quality show. The intimate setting of the small theater makes for a very personal feeling experience, especially for front-row audience members who sit only a few feet away from the action!

This weekend is a big one for the Dolphin Players. Not only is opening night's "Party at the Playhouse" fundraising gala sold out, but it will be the first show to open with the majority of the theater's face lift completed. New paint, windows, a new door, and panels installed on an exterior wall for future murals have transformed the facade.

Friday's show may be sold out, but there are many other opportunities to see "Ha!" Saturday night, October 15, is "Pay What You Can" night with no set ticket price. Tickets for the remaining seven performances are $10 for general admission, $8 for seniors and students, and $5 for small children. "Ha!" runs for three weekends; Sunday, October 30 is the last show.

Don't miss this opportunity to be entertained and to support local theater!

Tickets are available at the door or through the Dolphin Playhouse website.