Bandon is becoming an increasingly well-known town around Oregon and beyond. The beaches are gorgeous, the cheese is hard to beat, the Cranberry Festival is hoppin, and the golf is world-class. A quieter but strong claim to fame for our fair town, however, is the depth and breadth of the art world. From the visual arts to music to theater, Bandon is alive with creativity, and in the inner circle of that world is Victoria Tierney. Her lifes journey started in New York and took her through places like France, San Francisco, Los Angeles where she made her name as a visual artist and art director, working with famous artists such as Judy Chicago and Lloyd Ziff. Her journey has brought her to little Bandon, Oregon where she has grown roots and the art community, and we couldnt be happier about it.

Victoria Tierneys art journey began in New Rochelle, a suburb of New York City. With a brilliant sculptor for a mother who had a gallery in the city, she grew up immersed in the arts and spent every Saturdaytaking classes at the Museum of Modern Art. From the get-go, she explained, there was visual arts. She also spent time going to musicals. Her father worked on Wall Street, but there was art in his family as well; his artistic claim to fame was that his cousin was the lyricistLarry Hart of Rodgers & Hart, the Hollywood duo that wrote a number of songs for musicals. After Harts death, Richard Rodgers went on to partner with Oscar Hammerstein and formed another musical duo, Rodgers & Hammerstein.

After graduating high school, Victoria chose to attend Oberlin College in Ohio (a choice she made partly due to the fact that it was co-ed) where she studied French. There she met her first husband Craig who was into arts and theater, and after a couple of years and a summer in France, she transferred to University of California Berkeley to study art and lured Craig out to join her. While in the Bay Area, she designed costumes for the San Francisco Actors Workshop. There, she met Judy Davis, a set designer who had also been working as an advertising artist for Cost Plus Imports. Davis had been commissioned to design a stained glass window and asked Victoria if shed like to take her job at Cost Plus. Victoria had been working as a mail clerk in an advertising agency, so she jumped at the chance, and had to transition quickly from drawing only people and from the abstract expressionism she was immersed in at Berkeley to drawing furniture and dcor with a crow quill pen and India ink.

In 1965, Victorias path took her next to New Haven, Connecticut when Craig wanted to continue a Masters degree in architecture at Yale University. She took a job as an art director for the Sunday Magazine of the New Haven Register Guard, and as the youngest on staff, she was passed all the concert tickets and got to see Buffy Sainte-Marie, Bob Dylan, and others.

Her personal art changed and evolved during her stint in New Haven; while pregnant with her son Blake, she found herself compelled to draw on round surfaces, starting with ping pong balls and progressing through billiard balls to finally a globe.When the young couple moved to Manhattan in 1967,Victoria sold ping-pong ball earrings she had created while pregnant to high-end fashion emporiums including Saks Fifth Avenue and Lord & Taylors. She then worked as the assistant art director at New York Magazinewith Milton Glaser, one of the most celebrated graphic designers in the country, who became her most important mentor. Glaseris known for such iconic images such as the "I New York" logo and the psychedelic poster included in Bob Dylan's 1967 Greatest Hits album. This job, working with Glaser as well as influentialwriter such as Gloria Steinem, Gail Sheehey, and Tom Wolfewas, Victoria says, "...a dream job; probably the best one I ever had."

That globe made the next journey with Victoria and her little family when they moved west again in 1969. Herb Blau, provost of the California Institute of the Artsand formerly of the San Francisco Actors Workshop, offered Craig a job as assistant dean of the design department, so the next stage of their lives began in Los Angeles. Victoria became active in the feminist movement in Los Angeles and got involved with well known feminist artists Judy Chicagoand Miriam Schapiro. Sheco-created Nurturant Kitchen in the art installation Womanhouse,in early 1972. "Womanhouse" was the brainchild of Chicago and Schapiro and is still an icon of the Feminist Art movement. Another of Chicago's worksentitled The Dining Room is now a permanent exhibit at the Brooklyn Museum of Art.

Victoria and Craig divorced a few years after moving to Los Angeles, and Victoria found herself in need of a job. She started working with a friend of Milton Glaserdesigning record jackets and in her time there designed record jackets for big name artists such as Ringo Starr and The Allman Brothers. 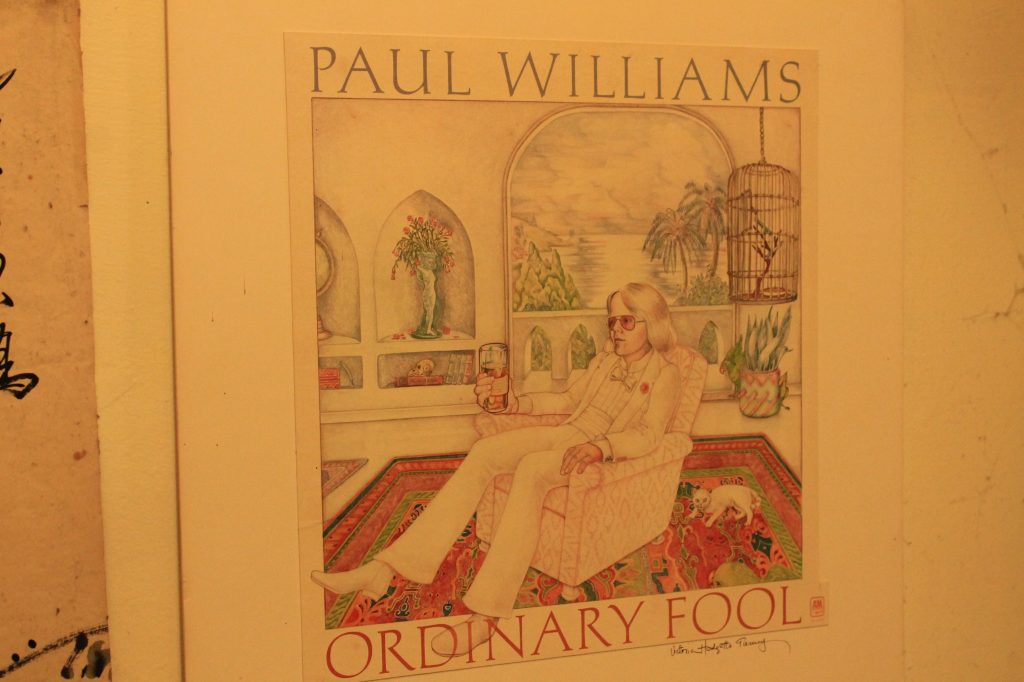 Around the same time, Victorias 7 year old son Blake came to her after waking and launched into a vivid description of a dream. She had to stop him, saying, Wait, let me get a pencil, and recorded Blakes dream. She took the book to a number of publishers in New York City, using some contacts she had made while working at New York Magazine. The companies all told her that something about the book needed changing; the book was too scary or not scary enough. Victoria finally found Joanna Cole, the childrens book editor of Doubleday, who liked the book just as it was (Joanna Cole certainly knew what she was talking about; she went on to write the popular Magic School Bus book and video series).

Victoria secured the contract fr the book, but life got in the way as it tends to, and Victoria had trouble finding the time to finish the drawings for the book. She thought that if she could just get away to somewhere not so busy, she might be able to focus enough to see it through. In May, 1977 she came to Bandon, Oregon, the chosen not-so-busy spot, where she had one friend, Mark Tierney. She had met Mark when he came to Los Angeles to visit their mutual friendLloyd Ziff, another record jacket designer (and who later went on to be the art director for some big magazines, includingRolling StoneandVanity Fair). In Bandon, Victoria was able to add the book's detailed illustrations, incorporating herself, Blake, and even a window in the top floor of their house, and with the drawings, Blakes story became the book Dream of the Dinosaurs. 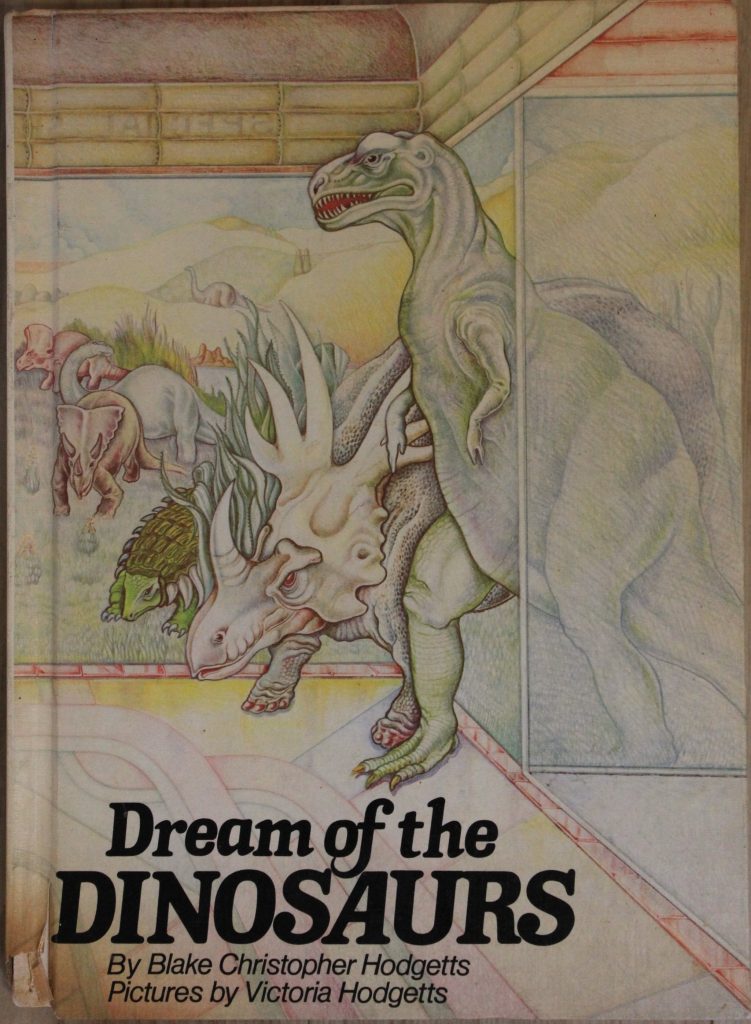 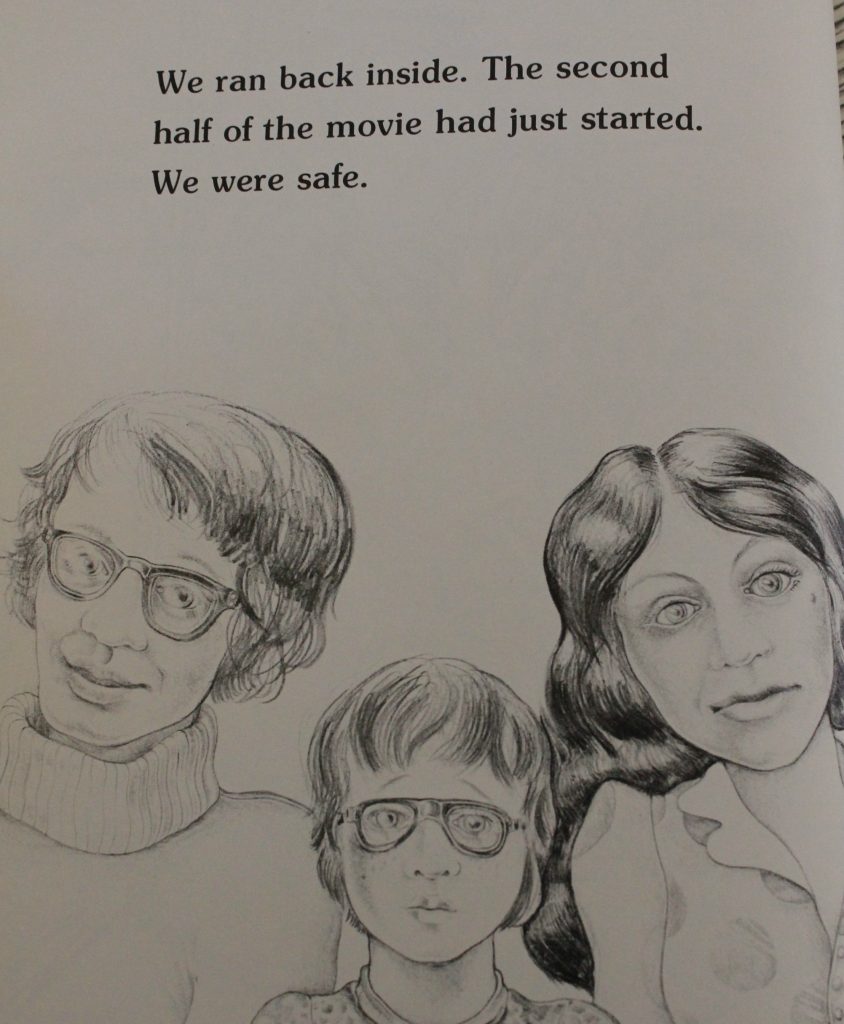 The friendship Victoria had with Mark evolved into a marriage, and the 2 months she had originally planned to stay in Bandon became 40 years. Victoria Tierney fit in well to the existing Bohemian community in Bandon (which included Bill Bradbury, later Oregons Secretary of State), a term of endearment used to describe whom others would call hippies. She might have been out of the whirlwind of the New York and Los Angeles art scene, but she quickly found her place in Bandon. She started as assistant curator of the Bandon Historical Society Museumand worked there with curator Shannon Applegate Muellerwho was in the midst of writing the bookSkookum: An Oregon Pioneer Family's History and Loreand later received the Governor's Art Award for the book and other historical writings. and has since curated countless art shows in the area, including the annual Boardwalk Art Show, shows at the Coos Art Museum, and over 60 shows at Southern Coos Hospital. Victoria was also instrumental in connecting the Bandon art world with theAVK Arts Foundation. AVK Arts sponsored many of the shows Victoria curated and was created by Elena Karina Canavier (an accomplished ceramics artist in her own right), who became known as the art angelof Bandon. 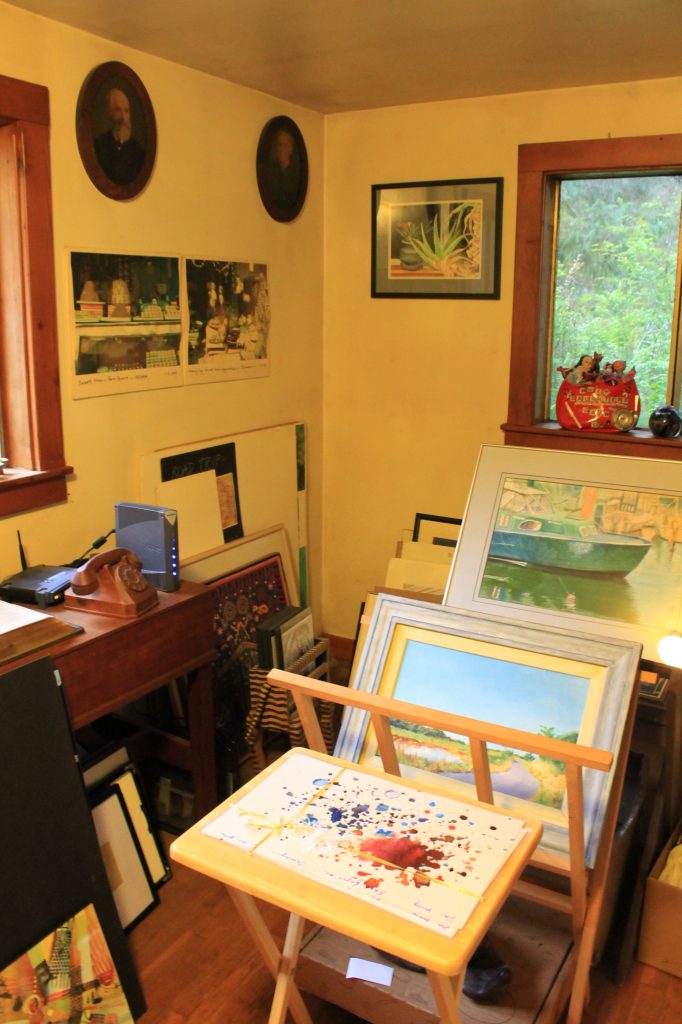 In addition to the shows in Bandon, Victoria Tierney has curated many traveling art shows. One near to her heart is art done by Oregon prisoners entitled Time which traveled to ten different venues in 2011 alone. When a family member was sent to the Oregon State Penitentiary in 2005, she became aware of the vast talent on the inside and wanted others to see the prisoners expressions of their feelings and experience in their art. Under the title Inside/Outside, the show traveled to the Bandon Library Art Gallery in 2015.

Victorias art hasnt been limited to the visual. She was dragged into the Bandon Playhouse and the theater world not long after landing in Bandon when her son Blake and husband Mark had parts in You Cant Take it with You. She was hooked after going to rehearsals, and over the next 20 years, both she and Mark were involved as Playhouse presidents, directors, producers, and actors. Victoria also worked on sets and publicity.

Mark and Victoria live on 57 beautiful acres just south of the Coquille River in Bandon. The house was thoughtfully designed and constructed by Mark. Its three stories have served the changing needs of the household while the couple raised kids and created their art. Once kids' space, the upstairs is now devoted to Victoria's painting and digital creations, and the daylight basement is a workshop for Mark's guitar building. Not surprisingly, their house is full of art, and each piece has a story; it is either made by a friend or acquaintance, or it represents a journey. Victoria purchased one painting of a jungle scene on the Amazon she was drawn to after a month spent in the South American jungle. 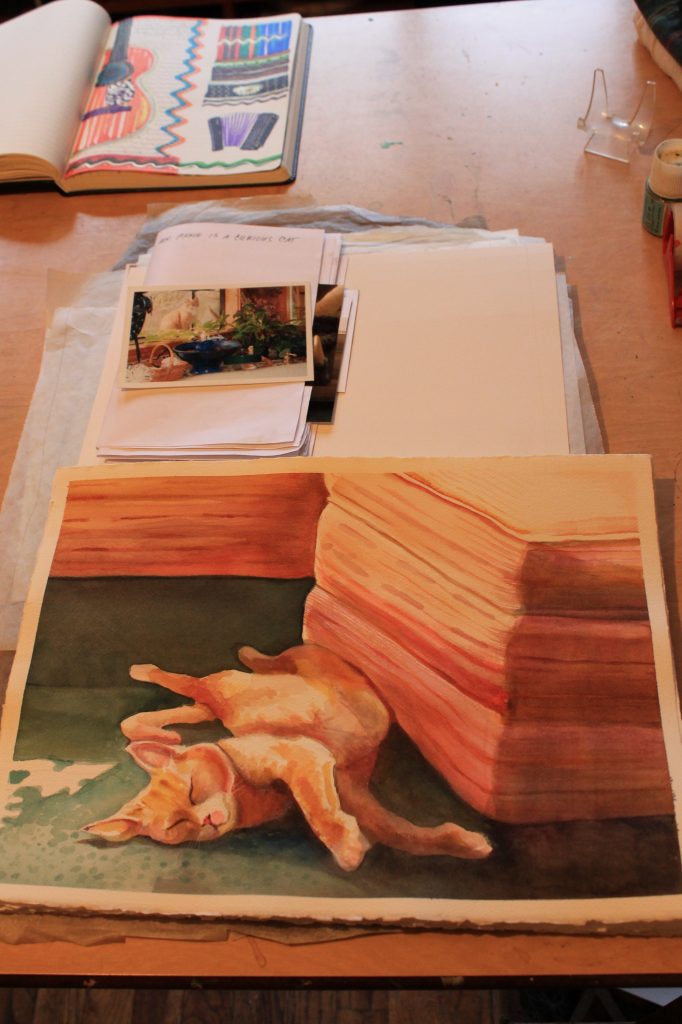 In the recent past, Victoria Tierney focused much of her art energy continues to paint with watercolors and has done a series of pieces around "Pinky the Cat." Lately, however, she has found a new passion in ArtRage, what she describes as a fingerpainting app. Examples of her ArtRage art is easy to find on her Facebook page, and she recently taught an Exploring ArtRage class at Art By The Sea gallery. 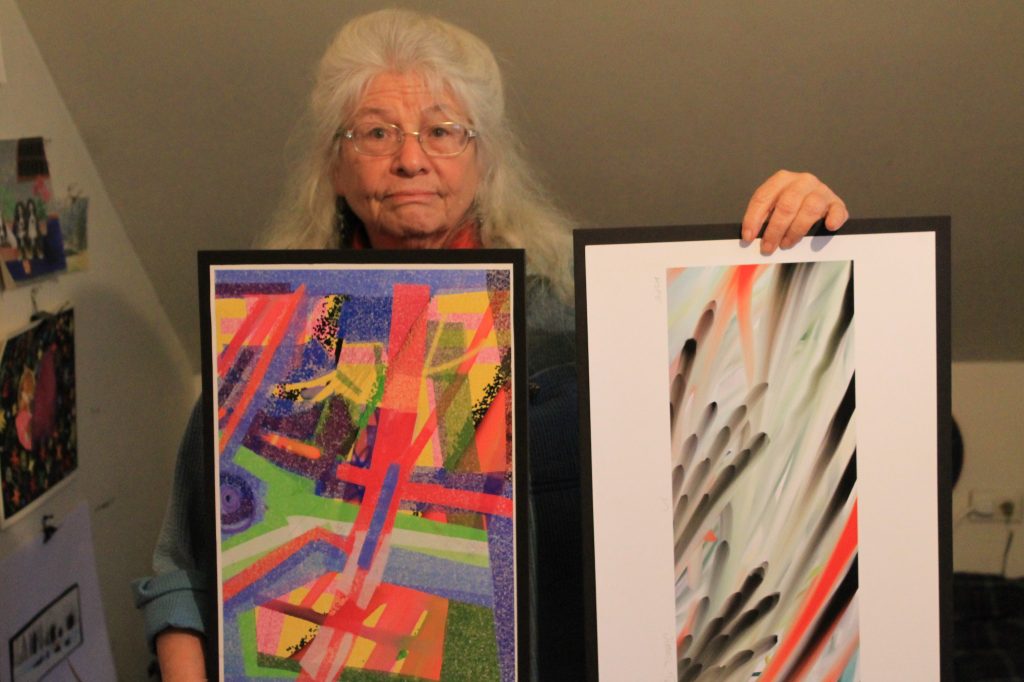 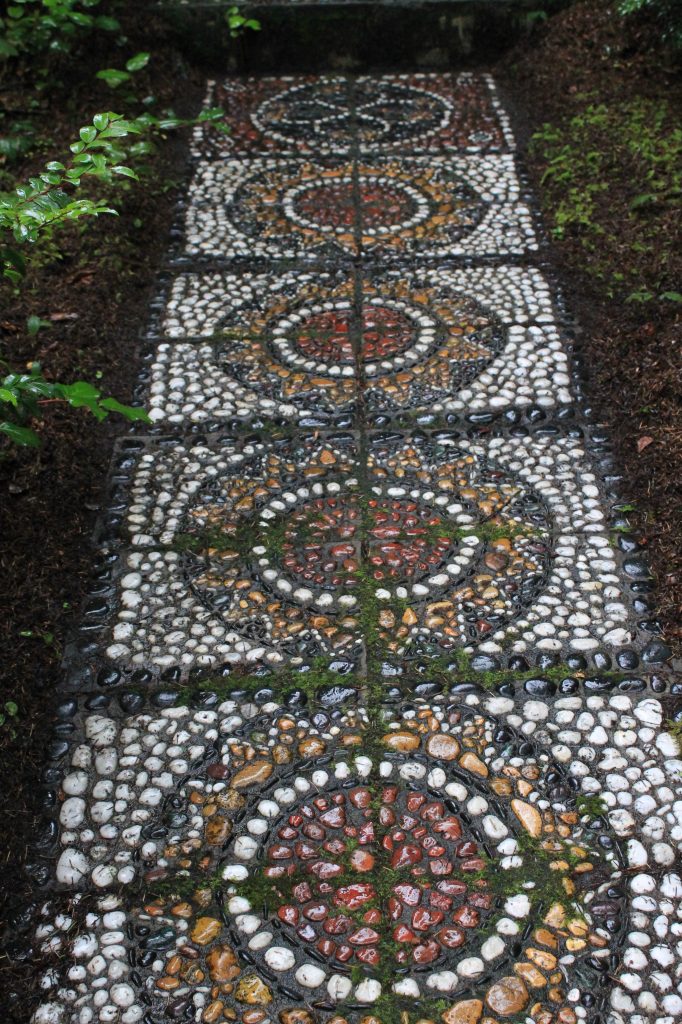 Even the outside of the house is its own mini-gallery. Greeting anyone who drives up is a sculpture of a person who looks to be emerging out of the stone from which it is carved. It is one of several beautifully unique sculptures in and around the house done by Victoria's mother. The mosaic stepping stones leadingthe way to the door add color to front yard and the lush green space behind the house were crafted by Victoria. She laughs and explains that it was one of many projects that quelled a friend's worry that Victoria wouldn't have anything to do in Bandon. 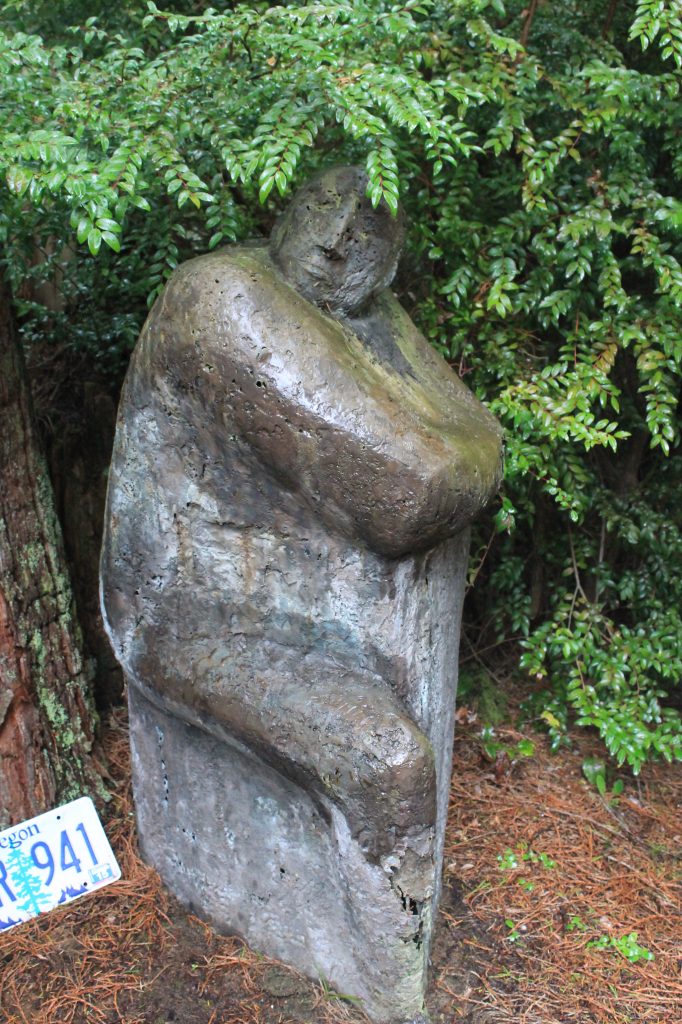 We are extremely fortunate that Victoria Tierney s journey has brought her to our fair town. She has led and continues to lead a full and interesting life as one of Bandons most prominent artists and cant help but share her love for art.