I recently had the honor and privilege of talking with artists Mark and Victoria Tierney, two of the most fascinating people I have met since moving to Bandon. Victoria told her story of her lifes journey that took her from coast to coast and involved many well-known artists. While Victoria was speaking, Mark Tierney sat nearby in the living room, comfortably holding a guitar in his arms, looking like the instrument was just another one of his limbs. It was clear that it was impossible for him to not play as he noodled around during the conversation, sometimes interjecting a story or comment, sometimes quiet, but always creating music. Not only is Mark a talented musician, he is a skilled woodworker and luthier, building guitars like the one he held on this day. 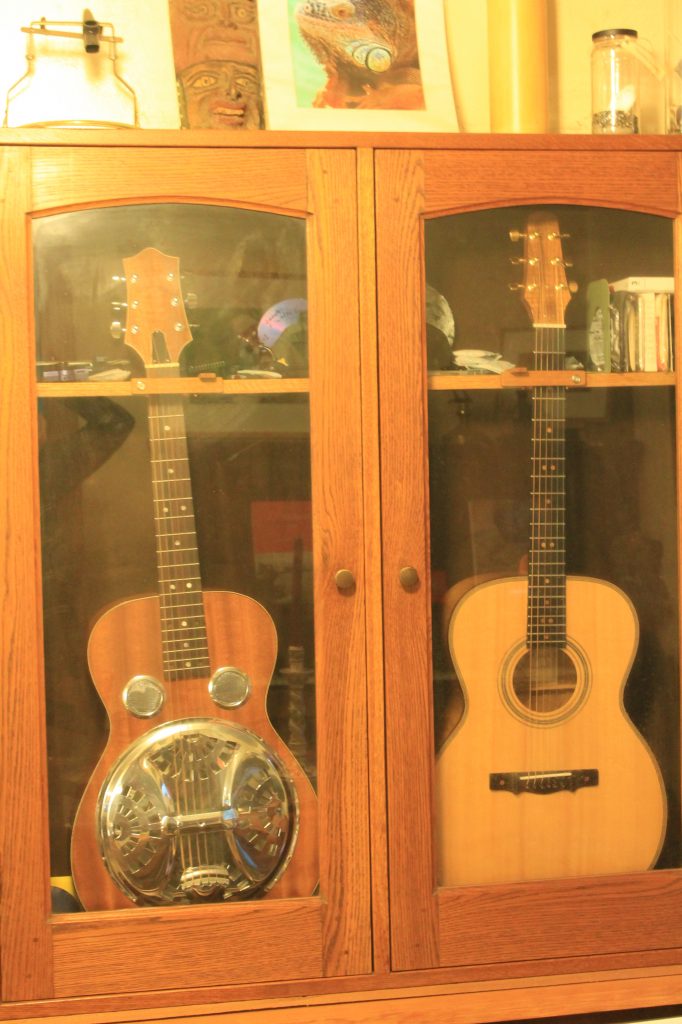 Mark Tierney is an interesting person with rich backgrounds in a number of diverse areas. He was born with music in his blood. His mother played music all her life. She was a Julliard-trained violinist and played as a summer replacement for the New York Philharmonic. She was one of those musicians whose skill and talent goes beyond the written notes. She was the organist at herchurch, and if she heard a piece of classical music on the radio that she wanted to play, she could transpose it onto the page, creating the printed music for herself. Mark has been making music since the age of 8 when he got his first clarinet. He picked up the guitar at the age of 14, and although he put it down at times, feeling that he couldnt measure up to the greats, he couldnt keep it out of his hands for long.

Around the same time Mark started playing the clarinet, he also started woodworking. His interest began as a purely practical endeavor. His family remodeled their house, and Mark was given the freedom to design and create his own bedroom. He learned from his older brother how to do things the easy way, and then was off and running on his own. Mark was not only brilliant with his hands but also with his mind. He earned an undergraduate degree in philosophy and started his masters degree, but partway through, he realized that a masters degree in philosophy would likely limit him to teaching, and he was done with academia. His skills and artistic eye continued to develop, and while in graduate school designed and built a house for his family in the Hudson Valley.

Combining his book smarts with his skilled hands, Mark went to the New York Public Library to find books about house building. He found a series of tradesmans manuals and pulled all the ones he could find on house carpentry. He studied actual construction sites as he came upon them to see how the theory and instructions were put into practice. He struggled a bit with 3-dimensional stairs and roofs, but explains that everything else was 1-dimensional and relatively simple. Having lived with his wife and two kids in a small apartment, Mark admits that he built too much space into his first house. It was hard to heat, especially when the electricity was off, and was a trek to the bathroom.

As a young man in the Hudson Valley in the late 60s, Mark was, as his wife Victoria put it, a genuine hippie while she was a yuppie. Mark modified her descriptor, explaining that he was just more arrestable. During this time, he met a genius photographer by the name of Lloyd Ziff, and the two of took a six-month cross-country trip across the country in a hippie bus. On one or more occasions, Mark explained, police officers would get on the bus and ask, Well, where do you think you people are going? while its occupants scurried to hide things they didnt want to be found.

Mark made his way to Bandon in 1971 with his two sons. He met Victoria a few years after this move during a trip to Los Angeles to visit Lloyd Ziff. They struck up a friendship that grew and developed through letters until Victoria came to Bandon in 1977 to finish illustrating a book written by her 7 year old son. Victoria had planned to stay in Bandon just 2 months, but her friendship with Mark evolved into a marriage, and the two of them stayed.

Taking what he learned from his house-building in the Hudson Valley, Mark designed and built a three-story house on 57 acres just outside the Bandon city limits where he and Victoria still live today. He also built nearly everything in the house made of wood: the furniture (save a few chairs), cabinets, shelves, tables, and more.

In 1980, Victoria gave Mark a book on how to make classical guitars, and Mark was hooked. It seems inevitable that a man who loves to play guitar and work with wood would someday combine the two. Like with the stairs and roofs, making guitars is to work with three dimensions, he explains. There is only one straight line, an imaginary one from the neck to the nut. Although building a guitar is safer and involves less pain than building a house, there is much more to it than a house. It is exacting. 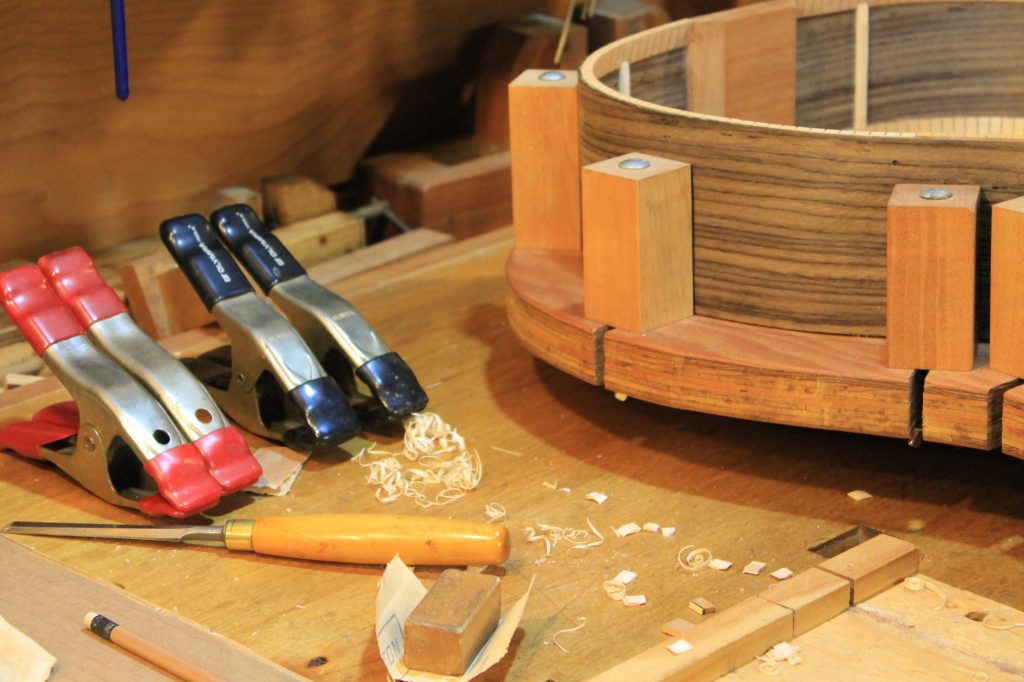 Marks guitars are beautiful. He now makes classical, electric, resonator, and steel stringed guitars (which he makes more than anything else). From the grain of the wood to the inlay around the edges and the sound hole to the lovely curved lines, each instrument is a work of art. He insists, however, that its not terribly difficult as the patterns hold your hand and guide the builder through the process. He keeps his eye open for wood he wants and stocks up when he finds it. When he found the perfect myrtle wood, he bought three lifetime supplies of it. 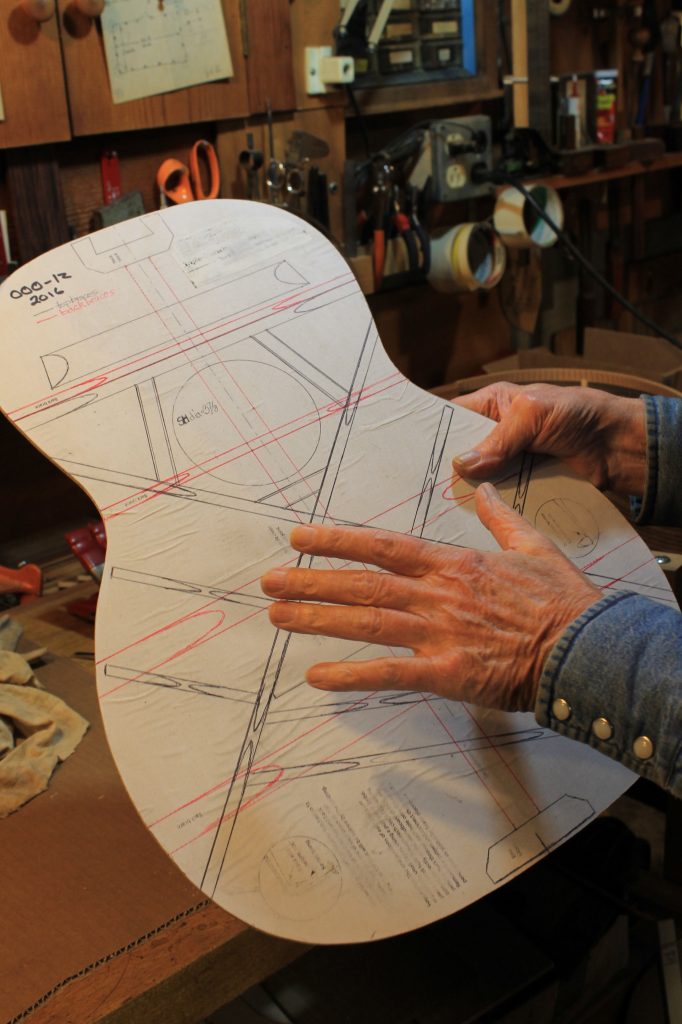 Although he will sometimes build a special order guitar, he mostly builds them on spec, selling them when someone expresses interest. I build what I want to build, he says. Usually, in the course of building one guitar, I think of three guitars Id like to build next. Occasionally, he will sell one to someone who sees it or hears him play it and asks if it is for sale. Although I imagine it might be difficult to part with such labors of love, Mark is pleased when good guitarists find that one of his guitars help them play something theyve had trouble with and want to buy one. Word of mouth spreads from there, and he does a decent business selling them. 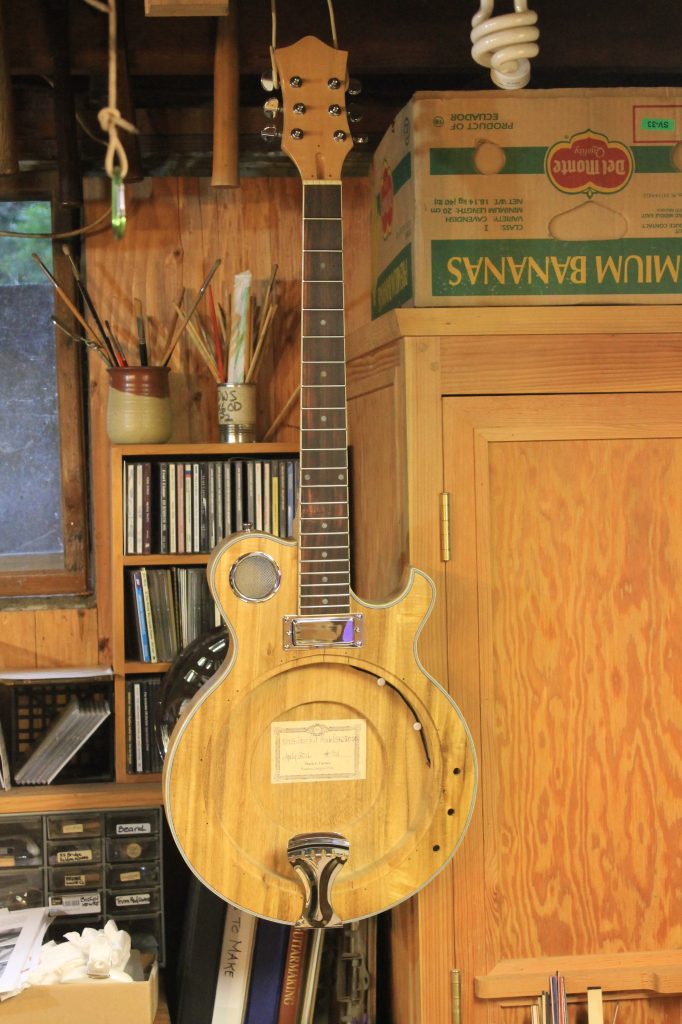 Having designedhis own house Mark has the perfect space for building his guitars. One room in the basement, accessed by a steep set of stairs, serves as his workshop and storage area. Every surface, vertical and horizontal, is covered with tools, plans, notes, materials, and instruments. 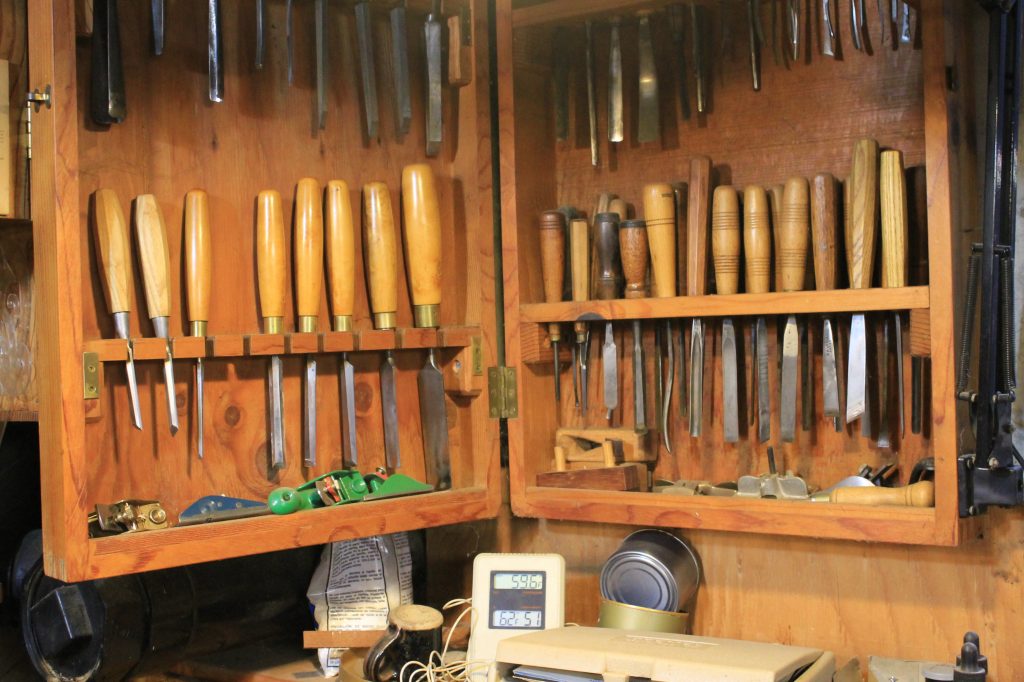 Marks talents arent limited to music and woodworking. He is a published writer, having written articles for the quarterly journal American Luthiere. He also found himself the author of a childrens book. When his two boys were young, he made them laugh with a story he created called The Little Fat Boy about a bad, greedy boy who lied. After Victoria entered his life, she drew pictures to illustrate the story, but it sat unpublished for nearly 40 years until in 2016 Victoria saw parallels between the Little Fat Boy and a man quickly rising in the current political scene. Mark and Victoria decided that perhaps the time had come to see the book published. http://www.blurb.com/b/6830904-the-little-fat-boy

Mark Tierney also found his way onto the stage as an actor when his stepson Blake got a part in You Cant Take it with You at the Bandon Playhouse. Three weeks into rehearsal, the director still hadnt found someone to play the lead role, a grandfather, and Mark was recruited. He stayed involved for the next 20 years, serving as president and acting in a variety of productions including My Fair Lady, Waiting for Godot, and Annie Get Your Gun, until his last role as Norman Thayer in On Golden Pond (the character played by Henry Fonda in the movie version). He figured that after playing an 80-year old man, there wasnt much left, except maybe God.

I dont know if hell get the chance to play God, but he does seem to transcend time and space at times. Laughing and playing his guitar or talking about his art, Mark seems happier than most of us get to be in our lives. It makes one wonder if perhaps some of his talent and serenity gets captured in his instruments, making me wonder if perhaps Im in the market for a new guitar.